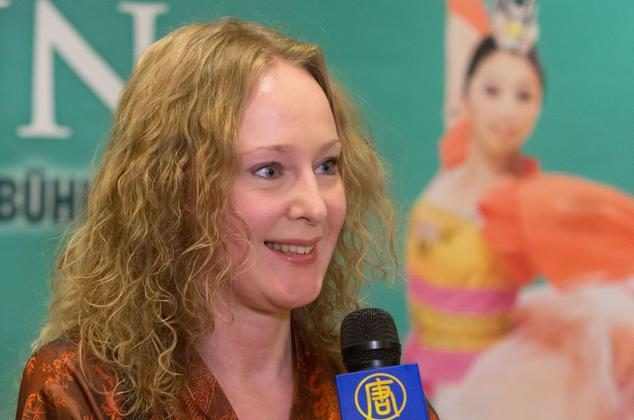 FRANKFURT—Ms. Maria Mokhova, a Russian pianist and organist, who saw Shen Yun in 2014, was eager to see it again at Frankfurt’s Jahrhunderthalle on March 15, 2015.

She said, “I am thrilled to see Shen Yun again this year, especially because it is a completely different performance. I’m certain that if one saw Shen Yun once, one hasn’t seen and absorbed all this show gives to its audience. Therefore, one gets excited year after year, when one hears that the show returns to a given venue.”

Ms. Mokhova was introduced to the piano in Nischnij Nowgorod, Russia, at the age of 6 and to the organ at the age of 11. After completing her studies at Frankfurt’s University of Music and Performing Arts, she moved to Heidelberg and studied at Heidelberg’s School of Music and Theater.

According to Shen Yun, “Wherever we go, our goal is the same: to revive traditional culture and values through classical Chinese dance and music. With a trove of 5,000 years of civilization to draw upon, each year’s production is different from the last. From ancient stories to contemporary tales, from ethnic dances to mini dramas, you should expect a familiar new experience.”

“For 5,000 years divine culture flourished in the land of China. Humanity’s treasure was nearly lost, but through breathtaking music and dance, Shen Yun is bringing back this glorious culture,” said Shen Yun on its website.

Ms. Mokhova believes that there are more reasons than the revival of China’s culture for Shen Yun to bring its show to venues worldwide.

“Shen Yun’s mission is especially important because it helps us learn about the country’s culture, China’s history and most importantly, what is truly going on in that country.”

According to Shen Yun, “Shen Yun cannot be seen in China today, where traditional culture has been nearly lost.”

One of Shen Yun’s narrative dances tells a story of people who practice Falun Dafa. “This is the spiritual meditation discipline, also known as Falun Gong, whose practitioners are persecuted in China today,” according to the program book.

Ms. Mokhova feels deeply for Falun Dafa practitioners and said “It is of greatest importance that the world hears about what’s going on inside China. It is cruel what is happening in China and that these young people would be persecuted in that country. One can protest and assist practitioners only when one hears about the ongoing persecution.

“Furthermore, for me, as an artist, it is of utmost importance to learn about China’s traditions and culture, because it is so different from ours. For example, Chinese dance is perfection of a group performance. The unison and harmony in which the dancers perform is unique in this world. This way of dancing is impressive and captivating.”

According to Shen Yun, Classical Chinese dance “has become a complete system of dance embodying traditional aesthetic principles with its unique dance movements, rhythms, and inner meaning … It is composed of three main parts: bearing, form, and technical skill.”

“I have learned much tonight and will work on what I have retained in my mind and what will come to the forefront of my thoughts over the next days.”