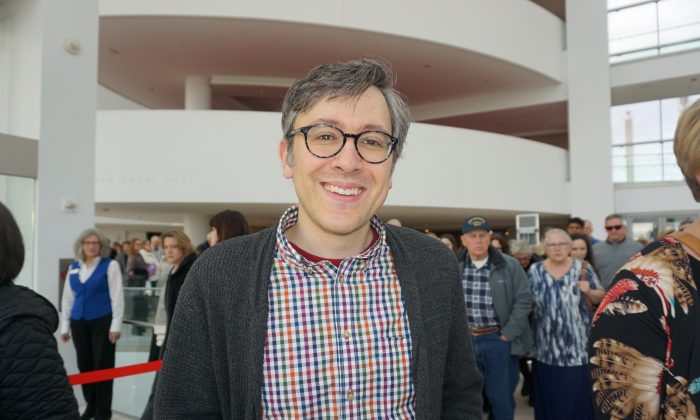 KANSAS CITY, Mo.—Producer Josh Fry was awash with inspiration after seeing 5,000 years of Chinese civilization brought to life on stage.

“I’m grateful for the beautiful execution of all of the dancing and it was an amazing performance,” said Fry after seeing Shen Yun Performing Arts Global Company’s matinee performance on Jan. 26 at the Kauffman Center for the Performing Arts.

Fry is video producer for Ambitious Pixels. He is most famous for a short documentary he shot in Africa about the HALO Foundation for which he won a Mid-America Emmy award and Telly.

Mr. Fry founded the video production company in 2009 According to its website, “Ambitious Pixels is dedicated to telling stories that establish an honest emotional connection between the viewer and the subject.”

From Past to Present

“It was fantastic. We really got to see a lot we didn’t know about, especially the modern-day portions, so really enjoyed it,” he said.

Fry elaborated on the aspects of the modern-day portions he found particularly impressive. Shen Yun’s story-based dances include scenes from ancient myths and legends to stories set in China today, based on real events.

“I had no idea about the meditation, and people being imprisoned for that, so it was really informative, and I’m grateful for that,” he said.

The meditation depicted in the dance was Falun Dafa, peaceful practice that follows the principles of truthfulness, compassion, and tolerance. The communist regime in China has been brutally persecuting followers of this discipline for almost two decades, and the story Fry saw addressed this issue.

“I was grateful for the production and it was amazing. So, I was very inspired,” he said.

China’s ancient culture is said to be divinely inspired. Throughout the millennia, one’s character, morals, and values were very important, as the the civilization was centered around the idea of harmony between heaven and earth.

Some of the values that Mr. Fry felt were highlighted throughout the performance were things like attending to your neighbor and paying attention to the things that are in front of you, but still being forgiving and helping others.

He pointed out that “helping others instead of getting distracted as well as even forgiving others who are trying to take advantage of you,” were some important values that stood out to him.