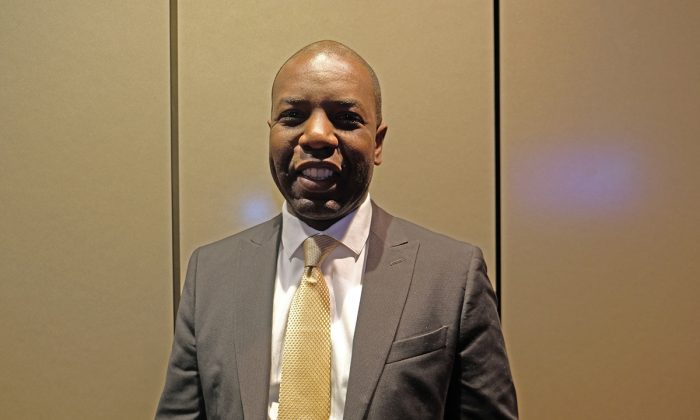 NEW YORK—Legislative representative Tahlil McGough has been wanting to see Shen Yun Performing Arts for the past five years. When he finally got the opportunity to go and see it at The David H. Koch Theater at Lincoln Center, he was very pleased that he didn’t miss it this time.

McGough, who works as an attorney for the Office of the Mayor of New York City, was captivated by the energy, color, and music of the performance and was particularly intrigued by the various stories from history depicted on stage.

“I thought it would be just dancing and things like that. But the fact that have little different stories and they have little history involved, I like that. So that kind of sticks with me,” said McGough, who experienced Shen Yun on March 8.

New York-based Shen Yun showcases China’s 5,000 years of semi-divine culture through performing arts. The performances consist of about 20 vignettes that feature classical Chinese dance, ethnic and folk dances, story-based dances, as well as solo vocalists and musicians. The dancing is accompanied by a live orchestra that blends Chinese and Western musical instruments creating a harmonious yet distinct sound.

Many of Shen Yun’s stories showcase historical events, myths and legends passed down generation after generation, and modern day pieces portraying today’s real-life human rights abuses in China like the persecution of Falun Gong, something McGough said he was familiar with.

These stories portray themes like spiritual devotion, the benevolence of gods, good and evil retribution, and the search for the meaning of life, according to the company’s website. Such values are foundational to traditional Chinese culture and are not political in nature.

McGough thinks it is important for Shen Yun to depict stories about the persecution in order to inform people about events happening outside of the United States.

“It is good that they have something like this for people where they can hear and see what is going on, and learn about something. I could hear people in the audience gasping because they didn’t know anything about this. So I think that is a good thing, I mean not everybody is aware of what’s happening abroad, so I thought that was pretty cool,” he said.

The legislative representative said he thinks it’s vital for people to learn and understand something that cannot be seen in China anymore. Many audience members are surprised when they hear from the emcees that Shen Yun can’t perform in China today.

“I think people don’t understand things like the great Cultural Revolution and getting rid of the [Four] Olds and all that stuff,” McGough said, referring to the Chinese Communist Party’s (CCP) most well-known attempt to eradicate 5,000 years of civilization and traditional culture.

The Cultural Revolution, which occurred between 1966 and 1976, was an unprecedented move to systematically eradicate traditional culture and replace it with Mao Zedong’s way of thinking and style of discourse, as Shen Yun explains on its website.

The movement attempted to eradicate various groups or ideologies perceived by the CCP as a threat. This led to the massacre of China’s cultural elites, destruction of ancient relics and antiques, calligraphy and paintings, classic books and scriptures, temples, and other important structures from history.

McGough added it was important for people to come and see Shen Yun and see elements from Chinese culture that are no longer allowed in communist China.

“[That is] because it’s a connection to the past, it helps you understand the way they are today,” he explained.

It is Shen Yun’s mission to revive China’s traditional culture and values and bring it back on stage. With the company touring in over 100 cities around the world a year, the performance is like a window into a cultural treasure that is nearly lost.

Overall, McGough thinks Shen Yun is an interesting show that can evoke different emotions and encourage audience members to reflect on the world around them.

“It’s a very interesting show that at times it would have you on the edge of your seat. It can make you think, it can make you smile, it can brighten up your day but it can also teach you something,” McGough said.