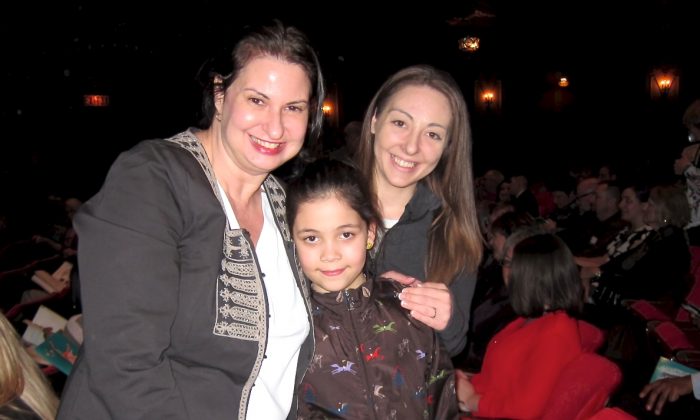 COLUMBUS, Ohio—Shen Yun Performing Art’s production of 5,000 years of divinely inspired civilization through dance and music was, in Brenda Bowman words, “a wonderful experience for me to share with my daughter and her fiancée’s daughter who is also in dance.”

“The music and the costumes are amazing as well,” she explained.

The essence of Shen Yun centers on classical Chinese dance, which has been passed down for thousands of years. It is its own distinct dance form and “strict training in both physical expression and specific postures. It also involves learning combinations of leaps, turns, flips, spins, and other aerial and tumbling techniques,” states the company website.

“I love that they are actually introducing culture of the Chinese community, and how all the dances originated. I think that’s an amazing part.”

“We are here with our 9 year-old granddaughter. It’s been an amazing experience for her. She is at dance class, so for them to explain each dance, and to tell the story behind it” was very beneficial,” she said.

“Shen Yun cannot be seen in China today, where traditional culture has been nearly lost. Yet Shen Yun … brings the wonders of ancient Chinese culture to millions across the globe,” states the company’s website.

Based in New York, the company has the freedom to express the traditional Chinese culture to its fullest.

Ms. Bowman said that for children and anyone attending the performance, seeing the comparison between American culture with our freedom of expression and that of a country where that is restricted and even persecuted, is very enlightening. “That’s good especially for children and anyone to understand that art should be freely expressed.”