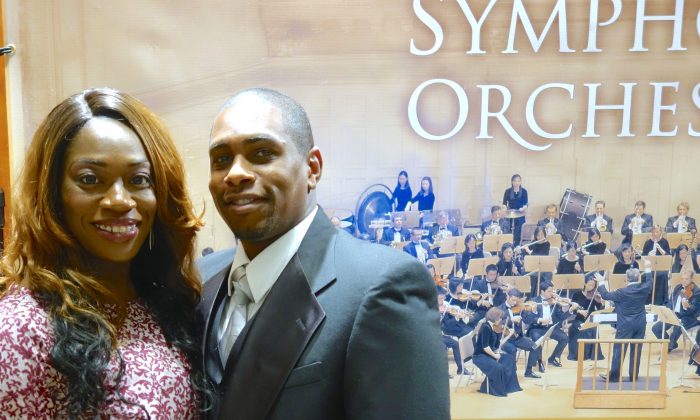 ATLANTA—It was clear that this married couple encourage each other to grow and blossom. Mrs. Quan Lanae Green and Mr. Najib Green, formally dressed, posed for pictures in front of a Shen Yun Symphony Orchestra banner at the Woodruff Arts Center on Oct. 27. According to Mrs. Green, they had made a commitment on Valentine’s Day. They saw the ballet that night. They promised each other to keep attending fine arts events. That is why they sought out Shen Yun Symphony Orchestra on its debut in Atlanta.

“I loved it,” said Mr. Green, who is an investor and owns NQ Green Investments. The music “made me envision scenes being played out.” That makes sense, because many of the compositions come from narrative dance stories in Shen Yun Performing Arts.

Shen Yun offers classical Chinese dance to the world, and Shen Yun Symphony Orchestra has accompanied it on all its tours.

Mr. and Mrs. Green did their own duet, interlacing their words: ‘The quality of it, as well, was really grabbing,” said Mr. Green.

“What really stood out for me was the conductor. My eyes were glued to him. Because of the confidence,” said Mrs. Green.

The conductor is Milen Nachev, originally from Bulgaria. In an interview on the orchestra website, he said that his first music lesson changed his life “completely—forever. I was only 5 years old and deeply in love with my piano teacher. She gave me a lot confidence.”

When Mr. Nachev was 9 years old, he conducted a record of Brahms Symphony Number 4 at his home. The physical interaction with the music moved him.

“The physical contact between the music and the gestures was something that was extremely inspiring for me.”

Mrs. Green said his fluent mastery made her think of divine arrangements. “It made me think, when watching him, about God, and how he orchestrates your life. I loved that. Is that too deep?”

Mr. Green noted all the gestures that the musicians displayed as they created the music. “Even their gestures seemed like art.” Some were tapping their shoes, some were restrained, poised, and others swayed. “Whatever it takes to get you into your mode.”

He had a wish for the musicians. He hopes they will keep perfecting their craft, and that every day will be a learning experience. He hopes, “no matter what trials and tribulations they may face, that they will continue to let their light shine. Continue to allow people to witness their excellence, because it’s inspiring.”

Mrs. Green writes a blog about how to go from “ghetto to fabulous,” she said. She said she had a tough upbringing in Poughkeepsie, New York, yet transcended it to become a “phenomenal woman.” She exuded confidence and joy. That was exactly what she responded to in the music.

She felt drawn to “the tenor, his voice, the strength in it, the energy.” Tian Ge sang “Fulfilling My Dream,” with verve and a radiant smile.

The Shen Yun Symphony Orchestra finishes its tour on Oct. 31 at the Veterans Memorial Auditorium in Providence. For information about the orchestra’s October performances, visit ShenYun.com/Symphony