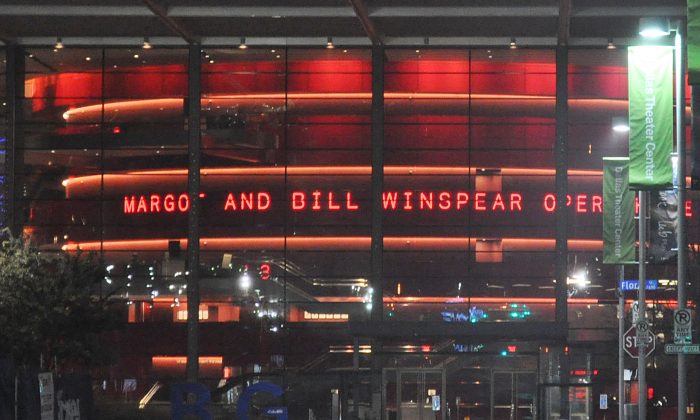 An all new performance opens a ten-show run on Jan. 1
By Epoch Times Staff

Cultures everywhere celebrate the New Year in all manners and forms, as it is a symbol of everything from new beginnings, coming together, or even revitalization.

In Dallas this coming year, some theatergoers will be celebrating the New Year with a performance to revive traditional Chinese culture—5,000 years of civilization brought back from the brink of extinction.

The New York-based company’s performances include dance and music and story, in a wide-ranging production, according to the program.

One classical Chinese dance piece shows water sleeves from the Sui Dynasty. Another tells of one of China’s most revered emperors. The ethnic and folk dances include lively, quick-stepping dances from the north, the south, and from ethnic minorities of China like Mongolians and Tibetans. The orchestra is the first to harmonize ancient Chinese instruments with a full western symphony. The soloists sing in the traditional bel canto vocal technique.

If reactions from audience members of previous seasons are anything to go by, the result is both spectacular and moving.

Don Anderson, mayor of the city Gunter, south of Dallas, bought tickets to a performance last season for his birthday and said he saw the “beauty of the soul” in Shen Yun.

“It all touches my soul. In one form or fashion, each part tells a different message … and each part resonates with me,” he said during intermission at the evening performance in the Winspear Opera House, on Jan. 10.

Shen Yun, which has four companies that tour the world simultaneously, kicked off its 2016 season on Dec. 22 in Houston, where it is performing 12 shows in a run that ends Jan. 2. Audience members from this season have already shared similarly profound experiences with Epoch Times.

“It sends chills down your spine just thinking about it, it’s centuries of human history that we are seeing,” said Chandran Kumar, a patent attorney, whose two daughters had picked Shen Yun for a Christmas Eve outing. He said the performance was humbling, inspiring, and life-changing.

For historian Dr. Manuel Urbina, “it was a revelation.”

Dr. Urbina, a passionate scholar of history, was especially moved by what Shen Yun was doing.

“A revelation of the creative spirit that humans have—that [Shen Yun] artists have—to share their artistry and their creativity with all of us. There is a connection there—a spiritual connection,” Dr. Urbina said.

For classical pianist Anne Vollink, Shen Yun gave her hope and inspiration for the future of the arts.

“It is artistically integrated on every level from the colors reflecting the sets to the geometry of the costume reflecting the architecture to the expansive movement with the chiffon flowing and how that’s sort of accentuated by expansive string sections, the orchestral colors, everything. It’s just so integrated. The colors, the sounds, the fabrics, the movement, all of it is beautiful,” Ms. Vollink said.