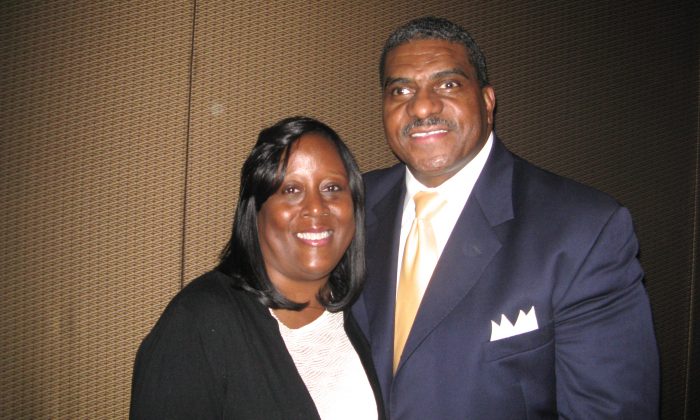 LAS VEGAS—When Kelvin Wimbish bought his wife, Karla, a couple of tickets to see Shen Yun in Long Beach as a surprise, all seemed well. She had wanted to see the performance for years, and Feb. 7 was the day. When she opened the present and peered at the date however, she reminded him of the important wedding they were to attend that same evening.

Mr. Wimbish’s solution was simple: Fly to Las Vegas to see Shen Yun on a different date. So, on Tuesday after work, that’s exactly what they did, and by 7:30pm they were seated comfortably in the front row of a sold-out Reynold’s Hall at the Smith Center for the Performing Arts.

“It’s amazing,” said Mr. Wimbish. “The colors, the history, the story—it was all worth this trip. It was. It’s fascinating.” This was before they had even seen the second half.

Both Mr. and Mrs. Wimbish were visibly moved and enthralled by the performance.

“These aren’t gymnastics, these are dancers. And their dedication to the dance has to show their love. Their movements are phenomenal,” said Mr. Wimbish. He particularly enjoyed a dance set in the 17th Century called Courtyard Elegance. “The order and the softness that they brought to the dance, to me, it takes me to a different place.”

He continued, “The way they move and their bodies turn, and before they come back up, they go down again—it’s phenomenal, and they’re in sync when they do that. That means they dedicated their time and their energy to ensuring that the reality of the piece that they’re bringing is as authentic as possible.”

Shen Yun’s website explains the emotive capabilities of Chinese dance. “China’s deep cultural traditions are contained in classical Chinese dance, allowing its movements to be richly expressive, such that the personalities and feelings of characters can be portrayed with unparalleled clarity. It is therefore capable of depicting scenes from any time period, whether ancient or modern, Eastern or Western, in a strikingly vivid way.”

Mr. Wimbish seemed to have noticed the importance of each subtle movement within the dance.

“Every piece, every expression, tells the story of the piece that they’re portraying, and if they weren’t fully committed, you wouldn’t see that. But you see it in every piece, in every turn and every stop—in the fight scenes, when they take off and fly into the water—you see it all. So it draws you in, it takes you there, and that’s what a performance is supposed to do.”

Being mere feet from the dancers, Mrs. Wimbish could see their joy.

A Shen Yun performance includes approximately 20 vignettes that carry audiences on a journey through 5,000 years of Chinese civilization, where myths and legends come to life through story-based dances, while purity and joy are personified through ethnic and folk dances and passion fuses with wisdom through vocal and instrumental soloists.

Mrs. Wimbish was touched by one particular dance entitled The Power of Compassion, which depicts the modern day persecution of Falun Dafa practitioners in China. In this piece, a police officer who is in the midst of terrorizing a Chinese man and woman, changes his violent ways after they help him recover from an injury.

“You can see the power of compassion, the power of love—the foundation of compassion is love—and it just changed that young man’s demeanor and his whole attitude towards people,” said Mrs. Wimbish. “And they just drew him in. That’s what love does; it just draws you in … Love shows no color; no ethnic background. There is no diversity in love because it’s just love.”

“Do not let this opportunity pass you by,” Mr. Wimbish said. “It is a piece of history that you don’t want to miss. It’s phenomenal. It will take you to different place, a different culture, a different time. It will draw you in, and you’ll be enriched by it. It’s exciting.”

‘It moved my heart, my soul’

Another audience member at the sold out performance on Tuesday was Pastor Lorrie Nieves.

“It moved my heart, my soul, my spirit,” she said after watching Shen Yun.

Pastor Lorrie was deeply moved by the vocal soloists, whose lyrics are displayed on a backdrop in both English and Chinese.

“I felt it when she was singing. I felt it through the words,” she said.

Shen Yun’s website explains that the lyrics for each song are original works written for each piece and are “brimming with philosophical reflection about human life” and contain deep layers of meaning.

She felt that the traditional Chinese values presented on stage resonated with her.

“We believe the same thing,” she said. “We were never intended to live here on earth indefinitely. Heaven is our home … We are important and we are significant and [God] loves us.”

Pastor Lorrie Nieves said, “I love the Chinese people and I never knew why.” She added, however, that now she has a better understanding.