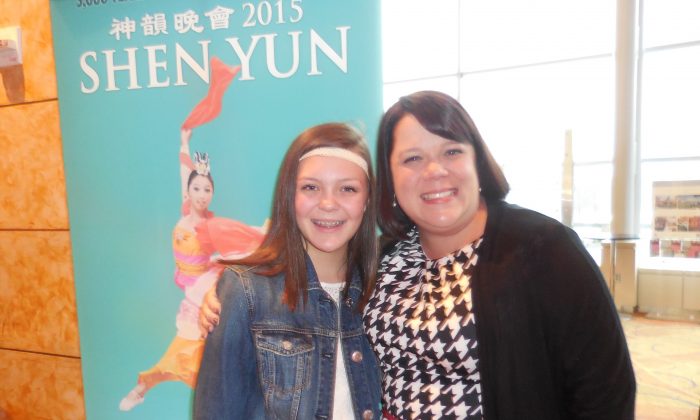 ATLANTA—A mother and daughter created a memento of their first experience of Shen Yun Performing Arts by posing for a picture in front of a Shen Yun banner on Jan. 3.

Daughter Madison Shendok was inspired to become a better dancer by what she had seen. “It was awesome! I’m going to try to watch what they do on Youtube and see if I can do that,” she said, smiling radiantly.

Her mother, Danielle Shendok, seemed proud of her ambition and that Shen Yun had inspired her to try to make herself a better dancer. Madison has been a competitive dancer for four to five years. She auditioned to join a team and was chosen. “I really like it. It’s really fun,” she said.

Mrs. Shendok is an event planner, a manager of Sales Administration and Events with Digital Projection, according to LinkedIn, and has expertise in audio-visual service arrangements. She was moved by the story-based dances: “the way the people were treated, the way they were able to express it through dance and through the music, and the projection.” “It just felt like you were there,” she said.

Shen Yun incorporates a projected digital backdrop into its dances. “The backdrops are magical windows to completely different realms,” its website states. “From vast open grasslands in one dance to the stately elegance of Tang Dynasty pavilions in another; from dusty yellow battlegrounds to tropical beaches to Himalayan peaks to picturesque scenery of the Yellow River Delta—the digital projection infinitely expands and transforms the stage.”

That’s a reaction the artists surely hope to inspire. “Shen Yun’s digital-backdrop team creates vividly animated settings, extending the stage and transporting the audience to a world where heaven and earth are one,” according to the website.

Definitely, we’ll come back.
— Danielle Shendok, Digital Projection
Madison also felt delighted by all the “colors and the sparkles.”