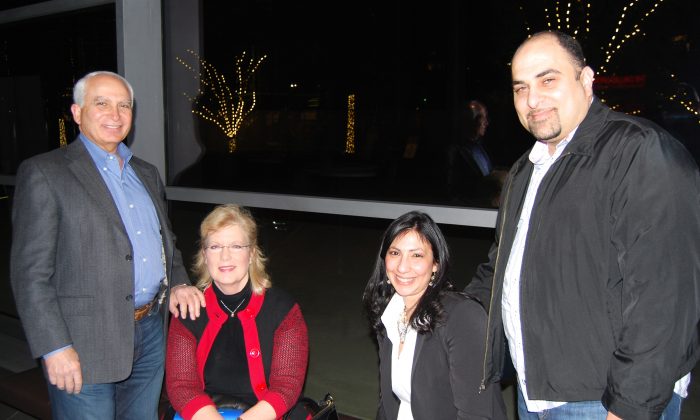 DALLAS—”I was just floating on air!” said Alex Tayem, president of an international company, after seeing Shen Yun Performing Arts with friends and family at the Winspear Opera House in Dallas, Jan. 3.

Mr. Tayem, president of Trident Industry Supply for 30 years, saw the performance with his wife Cindy, Chairman of the Board for the Rockwall Area Chamber of Commerce, Dena Shalabi, and Ahmad Shalabi.

The New York-based Shen Yun revives 5,000 years of traditional Chinese culture through the universal language of music and dance to create an experience that was altogether “very spiritual,” Mr. Shalabi said.

“It calms you down,” he added.

“They’re so gentle—the light-weightness of their movements, the flowiness of their costumes,” Mrs. Shalabi said.

Traditional Chinese culture is said to be inspired by the heavens, and the connection to the divine is present in every aspect of a Shen Yun performance. From the costumes and the digital backdrop, to the lyrics sung by the bel canto solo vocalists, deeper meanings permeate through each Shen Yun production.

“It was very peaceful, very relaxing,” said Mrs. Tayem, adding her appreciation for the performers.

“You have a thought of what the Chinese are, but there is really much more—much, much more,” he said.

Under the atheist communist rule, traditional Chinese culture and its arts were nearly lost. However, in 2006, artists came together from around the world to establish Shen Yun.

“It’s wonderful,” Mr. Tayem said. “There is so much more that we don’t know about, and [that] we need to know about.”

Shen Yun offered the full history of traditional Chinese culture, Mr. Tayem said, from its divine inception to the future of China.