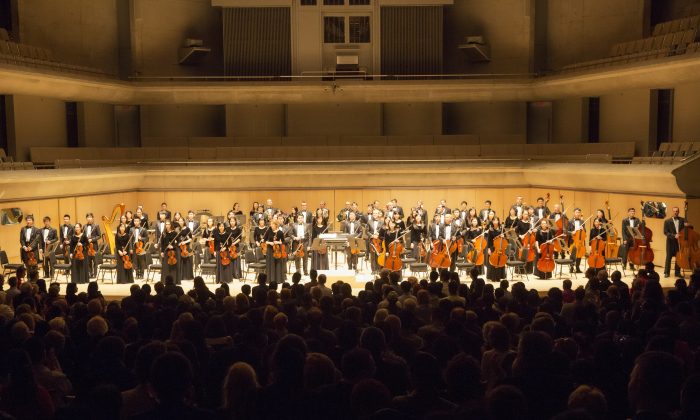 It starts with a bang—or, more precisely, the sounding of a gong—to start the music of an evening in the Heavens.

Two-stringed erhu melodies give way to a procession of strings and brass, signaling the entrances of gentle goddesses and male figures that precede the Creator, who is represented by a stately theme played by the full orchestra.

It was an opening fitting of Shen Yun Symphony Orchestra‘s philosophy where, behind all their music, lies the belief that the enduring traditions of both Western and Chinese music are truly divine gifts. On Oct. 3, the orchestra began its 2015 tour at Roy Thomson Hall in Toronto, before playing a matinee at the Flynn Center for the Performing Arts in Burlington, Vt.

Next, the orchestra will perform at Carnegie Hall in New York on Oct. 10, and in Washington’s Kennedy Center on Oct. 11.

The orchestra, an ensemble of world class musicians from Shen Yun Performing Arts companies, blends traditional Chinese instruments into a full Western symphony, and masterfully, authentically, balances the natures of each school of music.

Classical musicians and aficionados lauded the fresh experience in Toronto.

“It’s a fresh experience. Shen Yun doesn’t come often enough, so it’s a fresh experience every time. But I’m reminded of the possibilities of this program and how exciting it is,” said accomplished conductor Kerry Stratton, of the Toronto Concert Orchestra and two popular shows on Classical 96.3 FM.

Mr. Stratton has had the opportunity to interview Shen Yun conductor Milen Nachev himself.

“He is a very fine conductor,” Mr. Stratton said. “I admire him very much.”

“To combine that sound—that very ancient sound with the more modern, let’s say, Western symphony orchestra sound—is a challenge that they’ve met, they’ve met very well. And the color is unique. You won’t find this color anywhere else,” he said.

“It really vibrates in your body. … Every hair follicle stands up,” said Javier Alvarez, speaking to that “uniqueness.”

Mr. Alvarez, who attended the Toronto performance with his family, tried to describe his profound feelings, and while submitting that “words can’t exactly express what I am trying to tell you,” he shared this:

“It was a flood of feelings and visualizations—childhood, movies, just scenic pictures that I have seen before, places that I would like to go to. Whether it was something that I’ve already seen or whether I was imagining it I am not sure, it’s just that it was very vivid,” he said.

Radio host Tom Quick, a great advocate of classical music, said he felt privileged to attend the concert in Toronto.

“I would say they are, without question, one of the best orchestras I have heard in a long, long time. I love the blend of the Chinese traditional music. They are a first-class orchestra,” Mr. Quick said. “It’s a very, very exciting concert.”

On Sunday in Burlington, Vt., educators spoke of inspiration.

“It was wonderful, sublime, amazing, inspirational, and I’ve never heard anything like it,” said Kay Trudell, a retired high school teacher.

“It was so melodic and beautiful, and I just listened to it and was so at peace,” said Lori Dow-Moore, a Spanish and French high school teacher.

Suki Ciappara, an art teacher, said the three standing ovations the audience gave were not enough.

“It was wonderful, believe me,” said Ms. Goodman, who attends everything at the Flynn Center and has been a donator to symphony orchestras in Vermont for ages. “I’m just shaking, it was so wonderful. I didn’t want it to stop.”

Museum director Matt Powers celebrated his birthday at the Flynn Center with his family, including his son Finn, who goes to sleep to a Chinese music CD every night.

“I really liked the combination of Chinese tunes and instruments with the other instruments,” said Finn, who plays trumpet and drums himself.

Louise Mueller found deep emotion in the performance. “The music really touches something inside, and music is so universal I think that’s what strikes me,” she explained. “… it speaks to all of us and it brings us all together.”

“I was emotional, a little teary sometimes, because it touches your heart,” Ms. Mueller said.

With reporting by NTD Television, Dongyu Teng, and Catherine Yang.