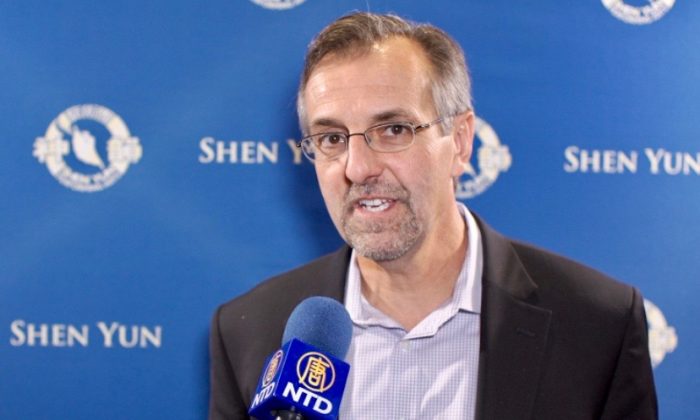 Otto Vejsada, SVP and chief engineer at Bank of America, experienced Shen Yun at the Center for the Performing Arts in San Jose, California, on the evening of Dec. 29, 2018. (NTD Television)

Among the theatergoers was Otto Vejsada, SVP and engineering manager at Bank of America.

New York-based Shen Yun has the mission of reviving China’s 5,000-year-old traditional culture through dance and music. Vejsada appreciated the chance to see this ancient culture.

“The tradition and 5,000 years of culture comes across,” he said. “[The] energy is incredible. We’re going to bring our kids to this as well. I have three sons. I think it’s good for the kids, absolutely. It just opens up the world … the whole new culture.”

According to Shen Yun’s website, classical Chinese dance is thousands of years old and was enriched throughout the different dynasties. It is a comprehensive dance system that includes difficult flips and spins and aerial techniques.

“The training must be just insanely rigorous for this, because [of] the synchronicity of the whole movement, and I’m just wondering how long these folks have to train. … It must be incredibly hard,” Vejsada said.

A live orchestra accompanies the dancers, performing original compositions with both Chinese and Western musical instruments. There are also instrumental and vocal solos.

“I’m just wondering how the music is written, and there’s so many technical questions that I have,” Vejsada said.

He enjoyed seeing the dancers’ flipping and tumbling techniques, as well as their costumes from different Chinese regions and ethnic groups.

Shen Yun includes classical Chinese dance pieces, ethnic and folk dances, and dances that tell stories and legends. Menkemeller was particularly amazed by “Porcelain in the Balance,” a piece in which the performers balance porcelain vases on their heads as they dance with flowing movements.

The scenery for the dances is created using an animated backdrop that expands the stage with scenes from ancient times, modern China, and even heavenly realms.

Menkemeller said the backdrop was fantastic and had “very nice graphics … stunning views and beautiful designs.”

Dharmesh Verma, VP of an insurance service company, saw the performance with his wife. He commented on how difficult it is for a group of dancers to accomplish the kind of synchronization he saw in Shen Yun.

“They have really flexible bodies,” he said. “They have the synchronization there, and they have also the flexibility in the body. So when they are doing a lot of jumps on the stage, they are not just jumping, they have a flow going on in the jumps.”

He also appreciated the traditional culture and values in Shen Yun.

“This is something we love,” he said.

“It has a lot of value and a lot of respect, and that’s what we’ve seen [in] this performance,” Verma said.