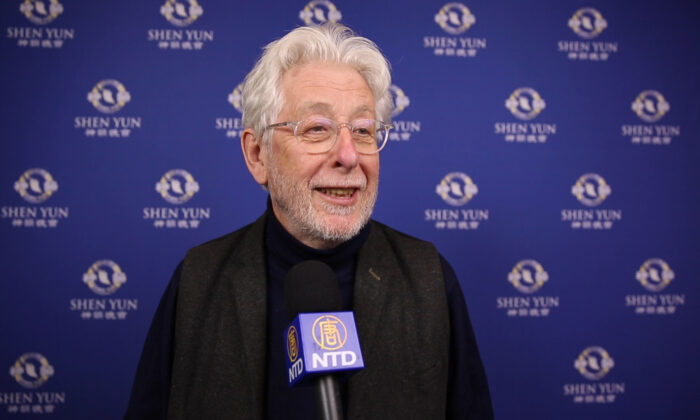 MONTPELLIER, France—Artist Robert Smith took in the one of a kind performance of classical Chinese dance by long-awaited Shen Yun Performing Arts at Le Corum in Montpellier, France on March 10, 2020, and had nothing but praise for the artistry.”

“It was magnificent,” he started. “The timing was impeccable and the color was superb, and the coordination, the dances was really exciting.”

“The costumes were superb, the colors, decidedly Chinese,” he said. After all, Shen Yun’s mission is to revive traditional Chinese culture. “I’m Scottish, we don’t use those colors. But yes, it was magnificent, absolutely magnificent.”

“We will tell all our friends,” Smith said.

This was Smith’s first time seeing the New York-based company, and he appreciated the ethos of the artists. Through the program notes, he learned that the company members all practice meditation, and strive to improve their character with the principles of truthfulness, compassion, and tolerance. It shone on stage.

“The whole sensibility of the Tao came through, yes you’d have to be able to meditate in order to do that, this kind of movement,” he said. “The inner core was there with the dance, it all worked together.”

The artists see this as continuing the traditions they seek to revive on stage. Traditional Chinese culture is said to be divinely inspired, and artists of bygone ages in both the East and West sought spiritual refinement in order to bring greater purity to audiences in their art.

“Everyone was working together for a greater good,” Smith said. “There was a deity there that was coming through, a sensibility of God coming through, that permeated everything.”

“It’s huge—traditional culture has so much depth,” he said, adding that he was left with a “greater sensibility that we are all the same, and we’re all enjoying music and dance, and the whole vigor of the experience.”