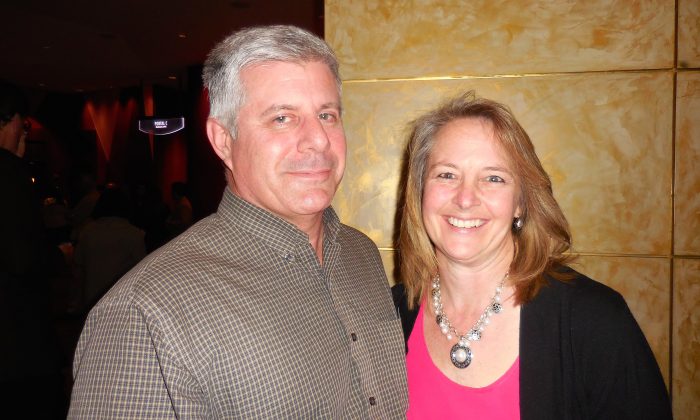 “I have to find another word! It’s vivid,” she said, with a kind smile. She said she loved the colors and loved the spiritual themes in Shen Yun.

Her husband, Rich Giannotti, brought her to see Shen Yun for their first time. He is an award-winning aerospace engineer at Lockheed Martin, which is just up the road from the theater. Lockheed is a major defense contractor for the Pentagon, and Mr. Giannotti felt an affinity for a narrative dance about wise defense in time of war.

Capturing Arrows With Boats of Straw describes a brilliant tactic Zhuge Liang, famous for his strategy, used before a battle at the end of the Han Dynasty to gather weapons from an enemy army without shedding any blood.

Mr. Giannotti said he loved the story and that it impressed him that the artists were telling a story from the year 208. He was pleased to be learning about the depth and longevity of Chinese civilization.

As a Westerner, he appreciated the masters of ceremonies who introduced each dance, enabling him to understand the stories that were not familiar or part of his cultural heritage.

Shen Yun’s mission is to revive authentic Chinese culture. Because under “60 years of communist rule the ancient culture has been almost completely destroyed … you cannot see a performance like Shen Yun in China today” according to the program book.

Mrs. Giannotti noted the irony. She said they have friends who are living and working and China, and that it is remarkable that Shen Yun cannot be seen there.