‘A Refreshing Feeling of the Heart Being Cleansed’ by Shen Yun 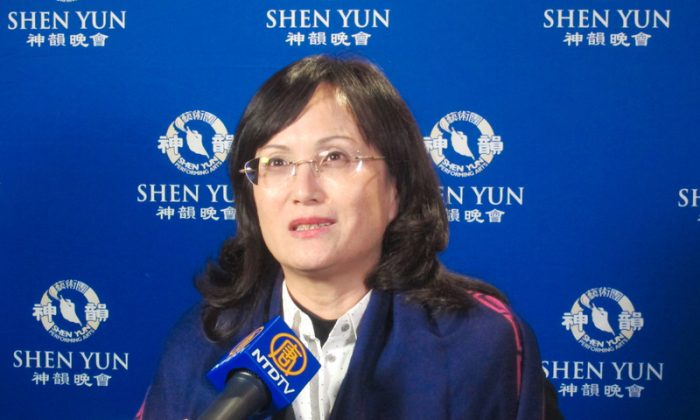 Luo Wenxin, the president of the youth branch in the Shanhui Charity Foundation, is grateful to Shen Yun for giving her a beautiful night. (Zheng Shunli / Epoch Times

KAOHSIUNG, Taiwan—”I can only describe it in two words: ‘fabulous and stunning,'” said Luo Wenxin. “But the tranquility that penetrated deep into my heart is even greater than the amazement. I really appreciate Shen Yun for giving me such a beautiful night.”

“I was really drawn in by the stage design and the music. The dancers and the Masters of Ceremonies were just tremendous! My heart was at peace after a busy day,” said Ms. Luo, the president of the youth branch in the Shanhui Charity Foundation, after seeing Shen Yun performance at Kaohsiung Cultural Center last Friday, March 25.

“I was just stunned. I didn’t expect such an awesome show,” she said.

It’s like the sun comes out unexpectedly after a drenching rain, a refreshing feeling of the heart being cleansed thoroughly.
— Lou Wenxin

Seeing Shen Yun for the first time, Lou described her feeling with a simile: “It’s like the sun comes out unexpectedly after a drenching rain, a refreshing feeling of the heart being cleansed thoroughly.”

“The backdrop was marvelous. It felt realistic as if [the dancers] really flew to heaven. Wow! … I was so moved by the scene.”

She expressed her appreciation to Shen Yun’s Artistic Director, saying, “The Artistic Director is the greatest. He produces such superb programs to promote our Chinese culture to the world. It’s really awesome!”

Ms. Luo was most impressed by the program, Trial by Fire, which portrays a story from contemporary China: Practitioners of Falun Dafa, a meditation discipline also known as Falun Gong, are being persecuted.

“I could not stop my tears when seeing the scene. Why is such great [part of our] Chinese culture oppressed? The deities will always bless us! Falun Dafa has such forbearance. It’s really lofty,” she said.

She observed that elderly audience members around her were totally absorbed in the program. They even shouted “encore” with the young people. As most Asian elders are quite reserved, she believes the elderly must be completely immersed in the entertaining ambiance.

The passion of the audience members and the atmosphere moved her. “I cannot forget the curtain call. It felt like I was leaving my family members. I felt a yearning to see them again soon. The ambiance was just unforgettable for me.”

Wholeheartedly appreciating Shen Yun for giving her such a world class show, she incessantly expressed her gratitude: “Thank you, [Shen Yun].”

Hong Pan had looked forward to Shen Yun’s performance for a year. Now she and her granddaughter were sitting at the best seats at Kaohsiung Cultural Center on March 25.

Hong’s eyes brightened when she talked about how good Shen Yun is. “It’s remarkable, not only in its art form, but the whole production.”

Hong, a traditional Chinese physician, indicates three points that moved her most: “The discipline of the Shen Yun Company, which is obvious to everyone. Then, the dance, which is not just beautiful, but a demonstration of strength and beauty. Most important of all, it portrays the indomitable spirit in traditional Chinese [culture].”

The traditional Chinese values presented in the show inspired her. “We must walk towards the right and the positive [direction] in our life. We must be righteous because righteousness always defeats evil. Didn’t the programs just tell us so? [The notion of] ‘Truthfulness, compassion, and forbearance’ is important.”

“I’ll recommend that more people come see the show.” Bringing her granddaughter, who is learning dance, Hong said, “It couldn’t be better. It inspires children to pursue perfection [as Shen Yun does] in doing everything.”