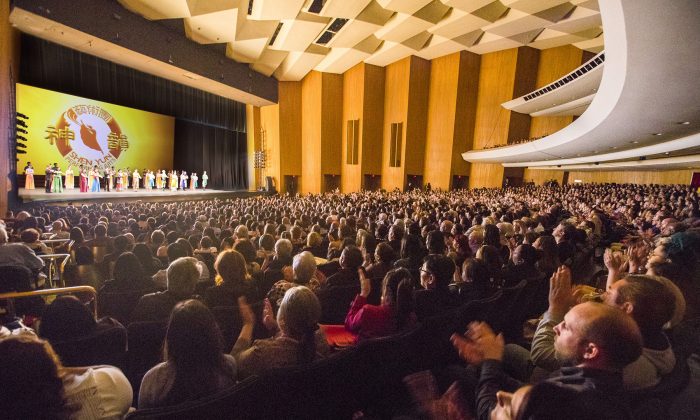 About 15,000 audience members were able to attend the performances over the weekend and experience the company’s mission of reviving the 5,000 years of traditional Chinese culture through spectacular music and dance.

People from all walks of life—professionals, artists, corporate figures, and those in public service—enjoyed the performance and praised Shen Yun for its mission, its artistic level, its inspiring dance stories, and the feelings the performance evoked.

More than a dozen people in the audience on Sunday were former members of the California Trump campaign team. They enjoyed the stunning beauty and quality of the performance and expressed their appreciation for Shen Yun’s display of the universal values of China’s divinely inspired culture.

Retired businessman Paul Taylor, who is a Republican candidate running for a U.S. Senate seat for California, attended the Sunday evening performance.

“All of [the performance was] phenomenal, really amazing,” Mr. Taylor said.

Mr. Taylor said he’s proud of his Irish heritage, and as a storyteller himself, he enjoyed Shen Yun’s use of storytelling to educate the audience about traditional Chinese culture.

“I know what it’s like to be a part of a history, of a people, and I think it’s valuable to keep that history alive. What [the performers] are doing tonight, keeping the [Chinese] history alive, I think is very important,” he said.

Mr. Taylor is also a musician. He played the trumpet for 20 years and participated in an orchestra. With his music background, he greatly appreciated Shen Yun’s live orchestra, which includes both traditional Western and Chinese instruments.

“[The Shen Yun orchestra] is phenomenal,” he said. “I know what it’s like for very top-quality music to be [performed]. It’s very nice.”

He also appreciated the dancers and their interaction with the animated projected backdrop. He called the choreography and the vivid colors of the background screen amazing and marvelous.

Mr. Taylor said the whole performance was beautiful, and he would recommend it to others. One of his friends had already bought a ticket to see Shen Yun in Palm Springs, where it will play from April 27 to 28.

Woody Woodrum, chairman of the Trump campaign team of California volunteers and director at Maxon Lift, said he experienced a wonderful feeling while watching Shen Yun.

“My experience tonight was tranquility. There was a feeling of divine spirit. The music was moving. The dancers were fabulous, and you could sense they all felt that internal peace,” Mr. Woodrum said.

The Shen Yun performers practice a spiritual meditation discipline called Falun Gong, or Falun Dafa, which brings a unique energy to the performance.

“The energy I got while watching is that internal spirit that I think we all have, that comes from our Creator. I could feel that in my heart and in my soul, and it was just a very, very nice feeling to have,” he said.

Mr. Woodrum also enjoyed the wide variety of colorful costumes used during the performance. He said the entire experience was “inspiring and invigorating.”

“It shows that all of our freedom, that everything we embody comes from above, comes from heaven,” he said. “I believe that we came from heaven, and that we were put here on earth to do the work of God and to better mankind.”

Jo Reitkopp is the media director of the Trump campaign team in Los Angeles and Orange County, and chairman and CEO of Make California Great Again, Inc.

“It was beautiful,” Ms. Reitkopp said. “When I saw the show, I started to cry because I love the Chinese people; they are in my heart. It touched me very much.”

Ms. Reitkopp said she especially enjoyed watching the women dancers because of their beauty and grace. She also felt a special focus on the divine throughout the Shen Yun performance.

“Every song was about God and about the Creator. Definitely the divine came through,” she said.

Ms. Reitkopp said Shen Yun could help people learn about traditional Chinese culture. She hoped that someday the Chinese people would be able to see Shen Yun Performing Arts in their own country, since the performance cannot be seen in China. Decades of communist rule have nearly destroyed China’s traditional beliefs and ancient treasures.

“If I were Chinese, and I would see such a beautiful show, it would awaken in my heart the love for China,” she said.

Shirley Husar is the CEO of Urban Game Changers and Story.com and is a columnist for The Washington Times. She served as a California Republican Party delegate for 10 years and an RNC delegate in 2004.

“Absolutely stunning, breathtaking, amazing. The energy they put out, the love, the compassion, and the passion they exude while they perform is amazing. I’ve truly enjoyed myself,” she said.

Ms. Husar said the dancers were spectacular and enchanting.

“I just find them to be full of energy and life,” she said. “When they move their arms, they’re just so full of love.”

She also enjoyed the live orchestra and the stunning colors in the costumes and in the backdrops. She said she felt a divine power in the performance and saw angels, along with a powerful being that was honored and respected.

“I felt relaxed, engaged, appreciative,” she said during intermission. “I can’t wait until the second half. I’m just excited.”

Nam-Yong Horn, president of the California Federation of Republican Women, also watched the evening Shen Yun performance, and she said the group’s mission to revive traditional Chinese culture and values was awesome.

“People forget it’s a very rich culture,” she said. “It shows right and wrong. If people don’t know right [from] wrong, that’s a problem. … Right and wrong can be eternal. It doesn’t matter where you live.”

Ms. Horn said the performance was very educational as well as entertaining, and the dancing, costumes, and music were all beautifully done.

With reporting by Sarah Le