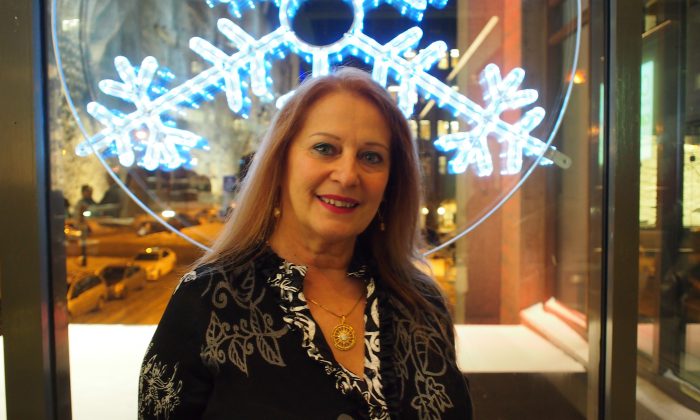 QUEBEC CITY, Canada—It’s the second year Denise Paradis has seen Shen Yun Performing Arts and the dance studio owner and veteran dancer was just as delighted as she was when she attended the renowned classical Chinese dance production the first time.

“There’s always something new—the costumes, the choreography, and the way the spectacle is presented. So, for me, I’m completely sold on Shen Yun!”

It is a highly appropriate stage name for the long-time teacher, dancer, and choreographer known for her passionate style, dynamism, and contribution to the development of oriental dance in Quebec City, as noted on her school’s website. The website also shows photos from provincial competitions at which members of the school had won medals.

As a veteran dancer and performer, Ms. Paradis recognized the professionalism of the show and the remarkable effort and “serious training” that had gone into the production.

“The technique they have, the hard work, it tells me something,” she said. “It’s extraordinary.”

Ms. Paradis said she was greatly impressed by the calibre of the all-new program.

“I know how much hard work it is. I think that these [performers] are super well-trained,” she said.

“To accomplish this, it has to be. These are people who are really very, very, very well trained,” she added, commending the dancers for their strength, energy, and mastery of the highly challenging movements integral to classical Chinese dance.

Training in classical Chinese dance has four components, according to the Shen Yun website. First,form involves dance combinations and basic barre practice. Bearing is a technique for expressing specific inner feelings through form. Dance technique requires training in difficult dance movements. And tumbling techniques include training primarily in different types of flips and in foundational skills.

Ms. Paradis was also greatly moved by the themes conveyed by Shen Yun, especially highlighting the opening piece with its grand display of magnificent deities in a heavenly paradise.

“For me, it’s as soon as it started—the first one, the first presentation, I already felt overwhelmed. I had tears in my eyes and I think that it set up well the rest of the show,” she said.

After seeing Shen Yun last year, Ms. Paradis wanted to let others know about the show. She gave flyers to her students and one of them, Yolaine Richard, came with her husband to see the show on Friday night as well.

“It’s colourful, it’s refined, very much so. I really like the oriental aspect, the aspect of the colour,” she said.

“I dance as well, so I can appreciate the synchronicity and professionalism of the dancers. It’s really incredible,” Ms. Richard added.

As an artist, she also commented on art and culture and their relationship to spirituality, a theme that came through in the Shen Yun performance.

As explained on the Shen Yun website, throughout history almost every culture looked to the divine for inspiration, and art was meant to uplift and bring joy to both the artist and viewer.

This is the principle that motivates Shen Yun performers, and the mission of the classical performing arts company is to revive a culture that was almost lost under communist rule in China—to restore principles such as benevolence and justice, belief in virtue, and respect for the heavens.

“We knew the Chinese culture was based on spirituality. It’s tragic that it’s being lost today. I believe people appreciate it a lot. We need it,” said Ms. Richard.

“A lot of the Chinese values resonate with us. They’re universal,” she added.

With reporting by Nathalie Dieul and Cindy Chan