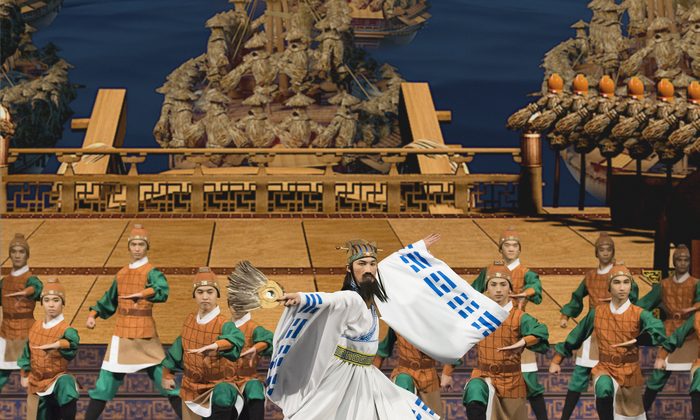 When Zhuge Liang was given just 10 days to produce 100,000 arrows for battle, it was the year 208 in ancient China, when no machines existed that could help the great military strategist produce so much ammunition in such a short time.

But Zhuge Liang, revered as the “embodiment of wisdom” in traditional Chinese culture, had no trouble accomplishing this incredible feat. Indeed, his uncommon wisdom told him he needed only three days, with the help of some large boats and a small army of men.

How he succeeded is a fascinating tale among the many cherished myths and legends passed down through the Middle Kingdom’s 5,000 years of history and culture. It made for a captivating performance of classical Chinese dance against a striking animated backdrop presented by Shen Yun Performing Arts as part of its 2015 global tour.

This timeless story, from the Chinese classic historical novel “Romance of the Three Kingdoms,” is just one of many that have been vividly brought to life by New York-based Shen Yun, the world’s premier classical Chinese dance and music company, since its establishment in 2006.

Along with the richly expressive power of classical Chinese dance, Shen Yun’s innovative digital backdrop charmed theatregoers with its animated setting of the banks of the mighty Yangtze River where the story took place. Converged there, some 1,800 years ago, were the great armies of the three rival states at the time. On the river’s south were the 50,000-strong forces of reluctant allies the Shu and the Wu. North of the Yangtze was the massive Wei army totalling 800,000 troops.

Zhuge Liang, the brilliant chief strategist of the Shu, had enemies in the Wu camp who wanted to bring him down. They challenged him to get 100,000 arrows ready for war in just 10 days. To their shock, with utter calm and confidence he told them that he really needed only three days. He even agreed to sign a pledge that would see his execution should he fail.

How he prevailed with ease was masterfully depicted through the Shen Yun dancers’ seamless interaction with the action backdrop, which transported theatregoers back in time amid the developments of the amazing story.

In the early morning of the third day, a heavy fog was blanketing the river when Zhuge Liang commanded his fleet to sail toward the enemy’s bank while his soldiers pounded their battle drums. Panicked and blinded by fog, Wei archers fired endless volleys of arrows in the direction of the thunderous sound. But instead of bodies of live men, those arrows lodged in the trunks of figures made of straw—fashioned to capture the sought-after ammunition as well as hide the soldier-drummers in the boats.

It was a spectacular presentation of a success story loved by audience members young and old, as Zhuge Liang sailed home victorious with boats laden with arrows “borrowed” from his powerful foe.

Sagas such as this one featured by Shen Yun every year not only display excellent artistry and sophisticated entertainment but also reflect the essence of China’s millennia-old culture. It is this essence rich with wisdom that Shen Yun performers seek to revive and embody through classical Chinese dance.

This essence is characterized by moral values vital to human beings such as honesty and kindness, propriety and tolerance, and the concept of harmony between humanity and the universe. The latter refers to a deep respect toward heaven and earth and respectful relationships between people.

The ancient Chinese believed that by cultivating their character to abide by these virtuous principles, they could gradually transcend the human realm to achieve the Tao, or the Heavenly Way. One would then become an enlightened being able to see and gain access to the full wisdom and truths of the universe.

In the 100,000-arrows story, this harmony and wisdom can be seen well manifested in Zhuge Liang’s ingenuous plan and confidence that he needed just three days to achieve his goal. As an advanced cultivator of the Tao, he had the ability to see things others could not see and accomplish things ordinary people could not accomplish. With his supernormal capability he foresaw the favourable conditions of fog on the third day that became a critical factor for his success.

Theatregoers can look forward to an all-new program in Shen Yun’s 2017 season featuring other beloved stories of wisdom that will not only entertain but also greatly inspire.