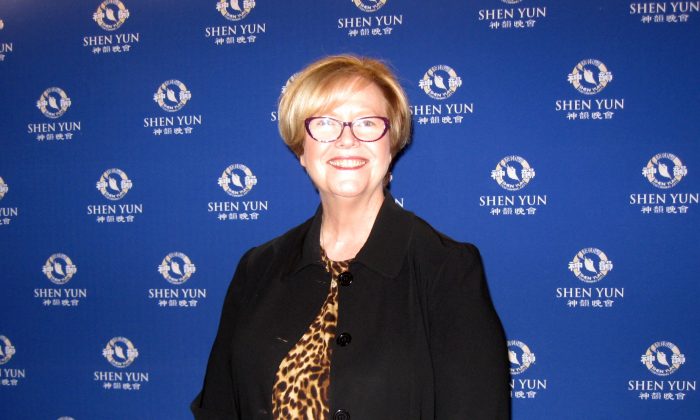 TORONTO—Toronto City Councillor Shelley Carroll came to see Shen Yun for a second time on the evening of March 30, this time bringing her daughter so they could enjoy the performance together at the Four Seasons Centre.

“I hope Four Seasons becomes [Shen Yun’s] new permanent home because it’s a perfect venue for the size, the grandeur of the show,” Ms. Carroll said.

Referring to the performance of Shen Yun’s erhu virtuoso Linda Wang, Ms. Carroll said it was the “most amazing performance” of the ancient Chinese two-stringed instrument she has witnessed, and it made her emotional.

“It brought tears to my eyes,” Ms. Carroll said. “It tells a story, so I tear up a little bit when it’s that perfect.”

Ms. Carroll also noted that the dances are accompanied by a live orchestra, which really enhanced the experience for her, especially because it was performed at a venue that was built during her time as a city councillor.

“It’s a feast for the eye as well as the ears, and that really shows off a theater that I watched being built—so to have this type of spectacular show in it was really emotional for me.”

Commenting on some of the spiritual themes in the performance and the belief in divinity, Ms. Carroll said that aspect of Chinese culture may not be known by many people.

“We rely on our Creator for guidance, and we don’t know that that’s the case in the Chinese culture as well, and so I was very pleased to have my daughter learn that with me, because it’s not often talked about,” she said.

Ms. Carroll added that it’s important to see these aspects visually portrayed in the performance as it is a “very deep feeling within” us, which many people take as their guide. However, she said, some get challenged when “they’re vocal about the fact that they’re guided by their Creator.”

“In amongst all of the entertainment and spectacle, to take a moment and remember that that’s a challenge for many people in Chinese culture and that they show a great deal of courage to hang onto that belief in the Creator was a good thing for us to see and experience here,” Ms. Carroll said.

Based in New York where it enjoys artistic freedom, Shen Yun has a mission to revive China’s divinely inspired culture, as explained on the company’s website. The show cannot be seen in today’s China under the current communist regime.

‘Getting Lost in Culture’

Reflecting on some of the values and virtues from China’s rich history as presented in Shen Yun, Ms. Carroll said it’s very important to remember that there are “simple things in life that you hang onto: the love of family, respecting mother and father, while still exploring.”

She noted the piece “Lost in a Painting,” in which a young woman is captivated by a painting and sees it come alive, exemplified by her own experience watching Shen Yun.

“For a young girl to get lost in a painting and dream in a story of love, but then really realize ‘I do have to be grounded’ and step back into the world, but remember that she had that experience—that’s what it’s like,” Ms. Carroll said. “We can get lost in culture and have some fanciful times, and when we come back to the real world, we have that little piece of magic that we experienced in culture.”

Comparing this evening’s performance to the last time she saw Shen Yun, Ms. Carroll noted that all the programs were different.

“Tonight I saw such an update in the last story [‘The Final Moment’] where it showed some of the challenges that modern youth face, and so that was a surprise to me to know that it really is very different each time and very up to date,” she said.

“I know that I will get a surprise here, there, and everywhere throughout the show each time. And so it makes it a good reminder for me that I should be coming every year.”