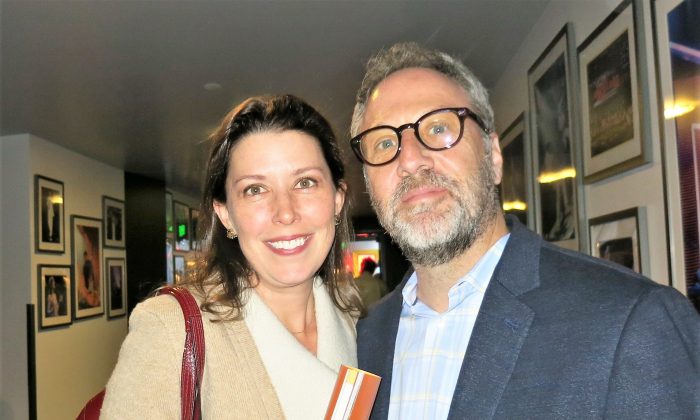 Brian Finkelstein, a comedic performer and an Emmy-nominated television writer, and his wife Jean Villepique, an actress and musician, enjoyed the Shen Yun evening performance at the Microsoft Theater in Downtown Los Angeles, Calif., on April 15, 2018. "I love it. I think it’s beautiful, very expressive and moving. ... [Their dancing skills] are fantastic, the best. ... I would say this experience is like nothing else. It’s almost magical. It’s a unique way of teaching through dance, but the spectacle is amazing, and the live music is also so exciting, so everybody should go," said Ms. Villepique. (Michael Ye/Epoch Times)

“I really liked the dance. I don’t know much about Chinese culture or Chinese dance, so it’s nice to learn and see.”

“I think [the dancing] is great. I think it’s beautiful. … The one with long sleeves, I really like the style of it. I liked the last one with the chopsticks.”

“I think it’s beautiful. I think the colors and fashion are really nice.”

“I like that it’s a live orchestra. I think the music sounds really nice.”

“It’s nice [the emcees] come out and narrate it, and they tell the stories.”

“I feel relaxed [from the music].”

“It’s really nice to watch the dance and to learn about the culture, and the two combined as a way to learn something is interesting.”