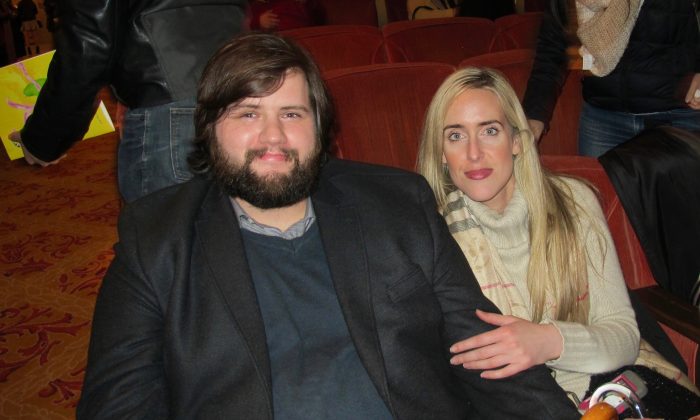 Marketing artist John enjoyed learning about the culture and history of China when he attended Shen Yun Performing Arts at the War Memorial Opera House in San Francisco on Jan. 5, 2016. (Steve Ispas/Epoch Times)

Marketing artist John enjoyed learning about the culture and history of China when he attended the performance at the War Memorial Opera House. New York-based Shen Yun aims to portray this 5,000-year-old culture for audiences around the world.

During intermission, John said he was eager to see more of Shen Yun’s stories in the second half of the performance. Many Shen Yun dance pieces tell ancient legends as well as stories of today’s China.

“It’s been really enlightening to some of the social issues that are going down in China,” John said.

Some of the dances depict the oppression of Falun Dafa, a traditional Chinese spiritual practice based on truthfulness, compassion, and tolerance. Falun Dafa has been persecuted by the Chinese regime since 1999.

“I think anybody could have identified with [the singer’s] feelings at that moment, so I think that it resonates with anybody who has a spiritual side,” he said.

He also appreciated the brightly-colored handmade costumes worn by the dancers.

“They’re beautiful, very nice,” he said. “One of the things that made me interested in seeing the show was because of the outfits. I figured it’d be a good way to see some of the cultural elements of design.”

John was impressed by the classical Chinese dance moves, which include difficult leaps, flips, and spins.

She understood and appreciated the spirituality of the opening dance piece, in which divine beings descend to the earth from heaven.

Ms. Murray’s companion, Amy, a chef, especially admired the brilliant colors in Shen Yun. As Shen Yun’s website explains, the dancers’ colorful costumes include designs from various ethnic groups, and the dancers use props such as fans and handkerchiefs to form splendid displays.

“The colors, the costuming, the dance—everything is beautiful,” said Amy. “It’s impressive.”

“Traditional” is at the heart of what Shen Yun does. According to the company’s website, values such as benevolence and respect for the divine are the essence of China’s traditional culture.

These values have been almost lost under today’s communist rule, yet they are alive in every Shen Yun performance.