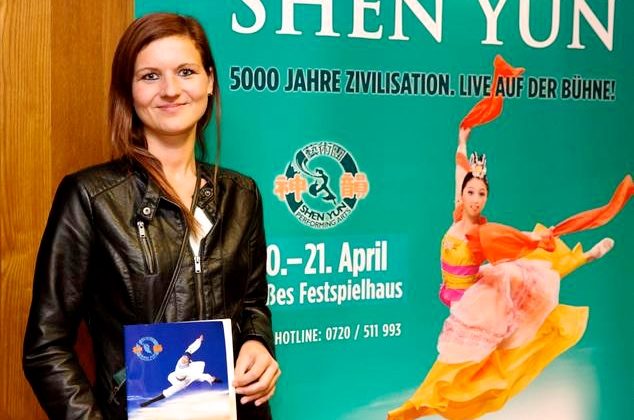 Ms. Julia Mayer, a journalist, forgot the world around her at Shen Yun in Salzburg on April 20, 2015. (Courtesy of NTD Television)

SALZBURG, Austria—When Shen Yun performed at the Salzburger Festspielhaus on April 20, Ms. Julia Mayer, a journalist, said, “I was overwhelmed by feelings during the entire show. To me it was as if the performers feelings materialized in front of me and I invited them into myself. I completely forgot the world around me.”

“This is true art when one can forget completely the surroundings and the world one lives in. Especially, when one can let go of any thought of the daily life,” she said.

“I was deeply touched and yet I can’t put it into words. I only know that I was affected deeply by everything I heard and saw on stage—the music, the songs, the backdrop, just about everything.”

Among all the instruments, Ms. Mayer found the erhu the most fascinating “I ever have heard. It awakened a yearning that is difficult to describe. The tones that this instrument brought to the ears of the audience can never be duplicated.”

She will take with her not just the visual but also something harder to describe. She said, “There was something in the environment that one could only sense, but it did have to do with the joy displayed by the performers and the compassion emanating from the stage.”

Mr. Marius Holzer, a broadcast journalist, said, “The show was unique and very powerful. This show brought out a wealth of feelings in me and gave me insights into the diversities existing in China.”

Like Ms. Mayer, he responded to the erhu. “The erhu appears to me as one-of-a-kind. It elicited a nostalgic feeling in me—a feeling that is truly special.”

Mr. Holzer watched the people around him and said, “I am certain that the audience loved the show, which can be seen by the applause. And it gave me a feeling which I find fascinating.”

“The feedback I got when I watched the people was unbelievable. They concentrated on and were totally immersed in the show. I could see their shining eyes and smiling faces.”

“A woman who sat in front of me couldn’t stop applauding, not just at the end, but throughout the show. This is the best kind of applause—the one when people applaud during the show.”

“I hope, no I’m sure, that there are still tickets for tomorrow’s show. I have to see it again, because who knows when the show will come back to Salzburg.