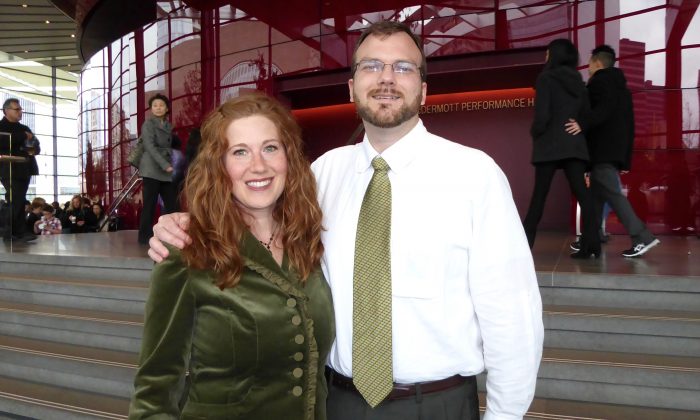 DALLAS—From the minute the curtain opened, interior designer Angela Salrin was moved to tears by the beauty of the Shen Yun Performing Arts touring company, during a Jan. 9 performance at the Winspear Opera House in Dallas.

“It was so stunning, and the women looked so beautiful, and the costumes were amazing,” Mrs. Salrin said, noting the costumes, the colors, and the music were “absolutely beautiful and breathtaking.”

She and her husband, Curran Salrin, a mechanical engineer, both said they were moved to tears at different times throughout the performance.

“It’s a stunning combination of visual, music, and song,” Mr. Salrin said. He said the beautiful music blended well with the vibrant colors of the costumes and the dancers’ fluid movements.

Shen Yun is a dance and music company based in New York, and has traveled the world for the last 10 years marveling audiences at sold-out performances. With its dancers trained in classical Chinese dance and its orchestra that blends Eastern and Chinese instruments, Shen Yun tells stories of traditional Chinese culture.

When the curtain rises, audiences first see the vibrant colored costumes and beautifully adorned dancers performing in a heavenly mist that sweeps across the stage. Although the scene is a stunning feast for the eyes, the deeper meaning behind it is the basis for Chinese traditional culture. According to the Shen Yun website, every dance expresses traditional values such as benevolence, justice, and respect for the heavens.

Mr. Salrin said he was particularly moved by a performance depicting a family torn apart because they refused to give up their faith in Falun Dafa, an ancient Chinese meditation practice that’s persecuted in China today. “Love and beauty continue on, they’re eternal,” he said, while holding back tears.

Despite the characters being oppressed for their beliefs, they still showed deep joy, love, and hope, he added.

“I think it was love, patience, tolerance, and compassion,” said Mrs. Salrin, who was equally moved by the piece.

Mr. and Mrs. Salrin said they also enjoyed the series of turning movements performed in a Mongolian drum dance. Mrs. Salrin said, “That was particularly stunning and just beautiful.”

The dancers perform sophisticated techniques that originate from the divinely inspired Chinese culture, which dates back over 5,000 years. Classical Chinese dance is a comprehensive dance system that combines expressive movements and postures with flips and tumbles.

Mrs. Salrin added, “all of it together, it was breathtaking.”