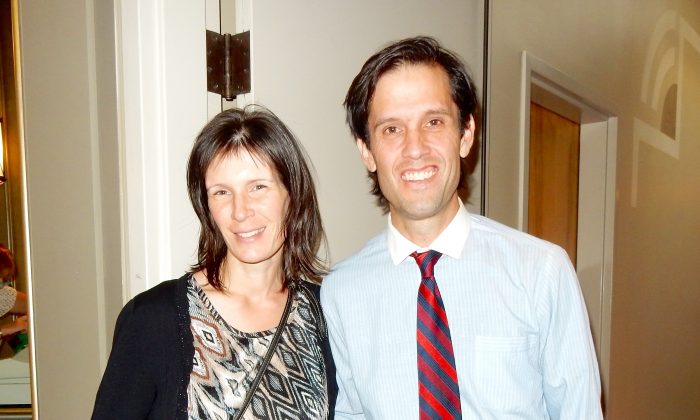 BURLINGTON, Vt.—”I was very moved by the opera singer, the man brought me to tears,” said nurse Leslie Rodriguez, who attended the single-concert engagement of Shen Yun Symphony Orchestra on Oct. 4 at Burlington’s Flynn Center for the Performing Arts.

Mrs. Rodriguez said she was very impressed with “the pure quality of his voice,” adding, “I also enjoy the woman opera singer, I love opera, and it just came through, a pure quality, and it felt like just touched my heart.”

Her husband Richard, a high school teacher, described the performance as “very powerful.”

“The music is very precise—and lots of energy,” he elaborated. “I also found the opera singer, the male singer, very moving—also the violinist was very incredible, very exuberant,” he said, listing all the things that impressed him.

Speaking of violinist Fiona Zheng as well, Mrs. Rodriguez added her own praise. “I have to say I have never seen such a complex performance and just be on so right on where she is supposed to be … it’s amazing to see it live,” she said.

Mr. Rodriguez commented about the educational value of the performance. “I think seeing the orchestra and how brilliantly they work together. … And just the sounds and the music itself, just comes out—for me, it stirs up lot of thoughts, I’m able to think things in a different way.”

Shen Yun Symphony Orchestra is unlike other orchestras in that it “blends the spirit of Chinese music with the power of a Western orchestra,” as the website explains. It accomplishes this through composing and arranging music that to bring together classic Western instruments with traditional Chinese instruments.

“I really was into seeing the combination of Eastern and Western music together, so I’m very impressed already … I was just looking forward to see[ing] the rest of the performance,” Mrs. Rodriguez said during intermission.

Mr. and Mrs. Rodriguez connected at a deeper level too, to Shen Yun’s core mission—to revive five millennia of culture that’s been all but lost in China. All of Shen Yun’s original compositions draw on the richness of 5,000 years of history of culture and legends.

“It was very enjoyable, quite captivating,” Mrs. Ducharme said. “It was a pleasant surprise, I love it. … It was more than what I expected.”

“Accentuating the beauty of ancient Chinese instruments amidst the grandeur of a Western symphony, the Shen Yun Symphony Orchestra draws on cherished ancient melodies and delightful musical styles to create a brand new, yet wonderfully familiar, experience,” states the orchestra’s website.

“There was a lot of variation of music, and I love all the parts—the Asian style with unique instruments, that was my favorite,” said Mrs. Ducharme.

The erhu is an indispensable part of Chinese music and is particularly known for its voice that can convey emotion. “All for Today” was originally written as a vocal piece for baritone and piano, but the song’s full range was conveyed by an erhu trio.

Mrs. Ducharme was also taken by the three opera singers, describing their voices as “intense and beautiful.”

“I felt touched by their voices, it must be such an intense, difficult thing to master, it just blows me away, stunning,” she said.

For Pierrette Mercier-Horvath, Mrs. Ducharme’s mother, it was an emotional experience that brought her to tears. “Oh yes, I cried, it was very, very good, I enjoyed it immensely,” she said.

“I am definitely going to seek other performances. I’m going to talk to my family and let them know I was amazed,” Mrs. Ducharme said ultimately.

On Oct. 11, Shen Yun Symphony Orchestra will give one performance at The Kennedy Center Concert Hall, Washington.