Shen Yun Story: ‘How deep was your love?’ 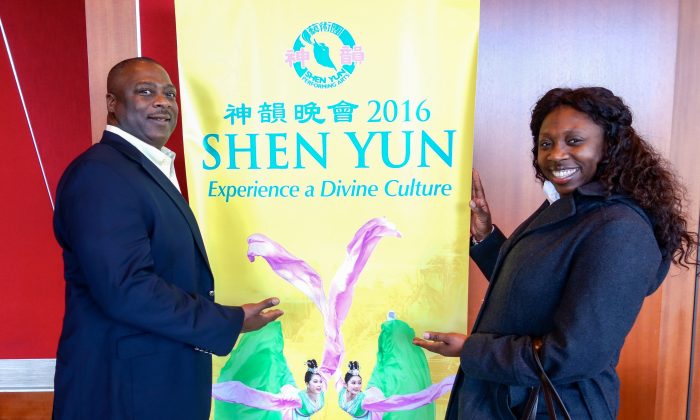 ATLANTA—Mr. Lawyar Alexander escorted his fiancée, Julia Forbes, soon to be Alexander, to see Shen Yun for the first time at Cobb Energy Centre. She is originally from Jamaica. He said, “It was great, it was very different, very enriching to watch.”

Mr. Alexander is retired from the military, and both the romantic and the warrior showed in his response to one dance, “The Lady of the Moon,” which he thought was very deep. It retells a classic legend of the origin of the moon goddess Chang’E, according to the program. Her husband Hou Yi is an archer of remarkable skill.

“Yes, that was, ‘how deep was your love?'” said Mr. Alexander. “He didn’t get a chance to drink the potion, so he was left brokenhearted.” Ms. Forbes also thought it was deep.

But Hou Yi does vanquish a wicked red dragon with his bow and arrow. “I liked the way he took him out in the end,” said Mr. Alexander.

He was astonished by the projected digital backdrops, which interact with live characters on stage. The technique is used very deftly in “the Lady of the Moon.”

Mr. Alexander is from New York originally, and he was interested to learn of Shen Yun’s New York roots. “I am glad that they were able to bring it here for us to get an understanding, and get some of the history, where they came from.”

According to the program, “Nowhere else can you see the authentic Chinese culture that Shen Yun presents. Sadly, this culture has been almost completely destroyed in China under communist rule.”

Mr. Alexander said, “It was something that isn’t allowed inside of China, but outside, and they are still able to do it. I had no idea that they had a school up in New York that actually teaches that kind of dance. So it’s very good to me that they are free to express their religions.”

Ms. Forbes, who owns a health care IT business, was also glad to learn about Shen Yun’s efforts to bring Chinese culture back from the brink of extinction. “Without that knowledge and teaching it in a way that people can understand … we wouldn’t know,” she said. Even if they did travel to China as tourists, they would not be allowed see the true stories Shen Yun has to tell, she said with a rueful laugh.

Although their purpose is deep and serious, the artists of Shen Yun expressed playfulness, according to Ms. Forbes. “And what they did, we know it was a serious issue. But they had fun. They all had fun. They laughed, they jumped with spring.”