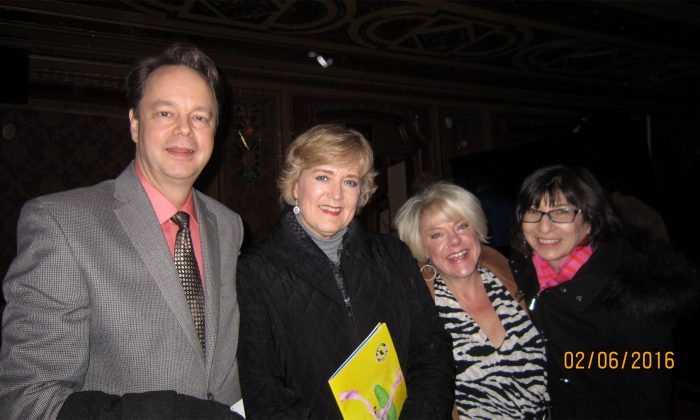 Gary Poholek with friends at the Shen Yun performance at the Providence Performing Arts Center, on Feb. 6, 2016. (Epoch Times)

PROVIDENCE, RI—There’s something about live theater that movies still have trouble replicating. According to Gary Poholek, an activities director for an assisted living center, Shen Yun Performing Arts demonstrated the magic of theater during a Feb. 6 performance.

“It was like being transported,” Mr. Poholek said, following the performance at the Providence Performing Arts Center.

Mr. Poholek is no stranger to the stage, and has done acting, singing, tap dancing, and Broadway musical theater. He said he appreciates it when he sees live theater do something that movies and television can’t. “I felt like that was magical,” he said. “It transports you to a different place.”

Shen Yun Performing Arts features classical Chinese dance, vocal music, and a live orchestra that seamlessly blends Eastern and Western instruments. According to its website, “Through the universal language of music and dance, Shen Yun weaves a wondrous tapestry of heavenly realms, ancient legends, and modern heroic tales, taking you on a journey through 5,000 years of Chinese culture.”

Mr. Poholek said “it was interesting to see all the different legends spanning the 5,000 years,” and he was also interested to see the religious traditions of Chinese culture.

These elements of Chinese culture can’t be shown in China, but being based in New York, Shen Yun Performing Arts is able to present these traditions.

As a non-profit, the mission of Shen Yun Performing Arts, according to its website, is “to revive a culture that was once almost lost.”

“We take self-expression and creative arts for granted in the United States, because we have no restrictions [on] freedom of speech and expression,” Mr. Poholek said, and noted seeing Shen Yun restoring traditions that are suppressed in modern China “was beautiful.”

Mr. Poholek saw the performance with a friend, Vicky Raia, who works as a secretary for a cardiologist and an optometrist. Ms. Raia said Shen Yun was “beautiful, and inspiring, and enlightening.”

Ms. Raia said she learned things she didn’t know “about the Chinese culture and its history,” and found it “very beautiful.”

In addition to the spiritual traditions that were the foundations of traditional Chinese culture, Ms. Raia said she was also impressed by the flips and tumbling used in classical Chinese dance, which are similar to acrobatics, but are rooted in the traditional dance form.

“I would say that you’ve got to see this. I’m coming back, and I’m bringing everybody I know. It’s well worth it,” Ms. Raia said. “It’s very peaceful to your soul, very calming, very beautiful.”

She said the performance gave her a message of “inspiration and faith,” and noted “I’m happy to see it.”

With reporting by Joshua Philipp