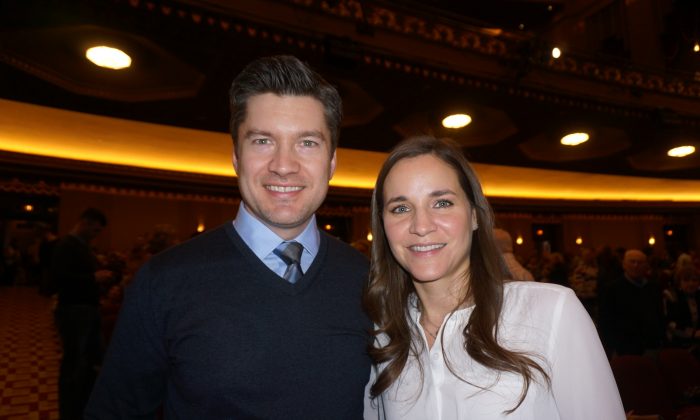 ST. LOUIS—Ben Moore didn’t know what to expect when he got a Shen Yun brochure in the mail, but when he saw it again on billboard during a business trip in Philadelphia, he knew he’d have to check it out.

Ben Moore is the owner and founder of Mine Trove, a company that specializes in data analytics and developing marketing strategies.

As Shen Yun explains on its website: “For 5,000 years divine culture flourished in the land of China. Humanity’s treasure was nearly lost, but through breathtaking music and dance, Shen Yun is bringing back this glorious culture.” This long and ancient culture is not one most are familiar with in the West.

Moore was struck by the breadth and depth of what he saw on stage.

“There’s so many different aspects of Chinese culture,” he said. “There is really a lot of independent subcultures and there was some inter-connectiveness to them, and similar beliefs that a lot of them had, but there’s a lot of diversity and I liked that it hit on many … it tied together that all of those are sort of one China and has a historical connection and root.”

“I think the last act showed that well—how the distraction of our current lives with technology and being so busy with our daily lives and all the things that you accomplish every single day. It’s very difficult to think back and be a little more patient and appreciate connectiveness with the divine, connectiveness with the universe, or however you or whatever your faith connects you to… I think all those things are important things to keep us rooted in there’s a bigger story to mankind and it’s not just what I need to accomplish today,” he said.

“I liked how it blended kind of an educational aspect of Chinese culture and history with somewhat of a faith-based performance covering [Falun] Dafa which I don’t know anything about, and it hit on Taoism, and it hit on Buddhism,” Mr. Moore said.

Falun Dafa is a peaceful meditation practice rooted in the guiding principles of truthfulness, compassion, and tolerance. It has been persecuted by the communist regime in China for nearly two decades. Traditional Chinese culture was built from values stemming from Buddhism, Taoism, and Confucianism. But this traditional culture and beliefs are suppressed under the communist regime.

“I think part of the struggles that any faith-based person has with the oppression of modern day China in terms of any belief system is that it isn’t consistent with the regime… Clearly they’re speaking out against you know things that are injustices about long-term—not just cultural reform, but cultural oppression that happened and bring it back to light,” Moore said. He added that he appreciated being shown this aspect of China as well.

“There’s an oppression against what they believe in, and I think they are using the art of Shen Yun to express that in a way that a lot of us will hear and appreciate. Because, before now I had no idea about any of that,” he said.

A Shen Yun performance usually has two or three vignettes that feature solo bel-canto vocalists. Moore felt the singers were very talented, and appreciated seeing the Chinese lyrics translated in English on the backdrop.

He said, “I think it was enlightening to see they expressed the message of the whole company.”