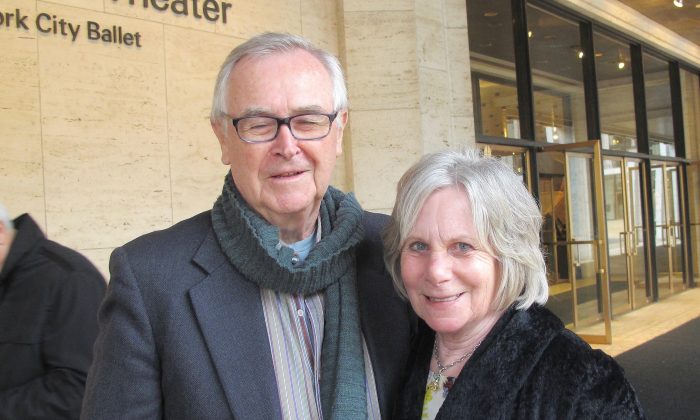 NEW YORK—The beautiful message that Joey Parsons was taking home after seeing Shen Yun was that we have come from heaven and we hope to return to heaven.

This message resonated with the flower designer. She shared that she’s had a rough time lately, losing some loved ones, and although she isn’t a member of a church, she still has her beliefs. Her faith is now stronger, after her sorrows.

That faith was reinforced by the performance of classical Chinese dance and music she saw at Lincoln Center.

In fact, the translation of the term Shen Yun means, “the beauty of divine beings dancing.” Each of the 20 pieces that make up the program reveals these traditional Chinese beliefs.

Those beliefs can be felt in every detail of the artistry. Even the beauty of the costumes seems to reinforce the idea of faith, with pure colors that astound audiences.

“The way they combined the tangerines and the apricots and the aquas, it was gorgeous. Gorgeous! That’s what I try to do with my designs. Create color and symbolism and all that good stuff,” Ms. Parsons said on March 12.

“Surprising,” said George Whitelaw, who attended with Ms. Parsons. The consultant in healthcare expected to see the colors, but not as dramatically presented as they were. He was fascinated by the hand props used, too.

But mostly he was surprised to learn so much from China’s history and culture from the performance.

Starting with the legend of creation, Shen Yun presents vignettes from various dynasties right up until the present day.

It was a combined performance, Mr. Whitelaw said. “The history, the dancing, was beautiful.”