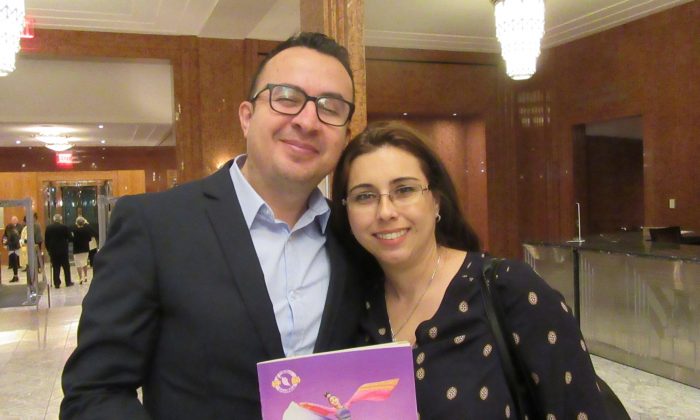 LAS VEGAS—Andres Gonzalez and his wife had been wanting to see Shen Yun Performing Arts for several years. On March 8, they finally attended the performance at the Smith Center for the Performing Arts.

“It was great, beautiful,” said Gonzalez. “It opens your mind to a whole lot of different things that you’ll never expect from a different part of the world, from a different culture, so it’s great to see something else different.”

Shen Yun was founded in New York in 2006 with the goal of reviving the authentic 5,000-year-old culture of China through stunning dance and music. Each year, Shen Yun creates an all-new production and tours the world, now with six different companies.

Gonzalez has worked in television for more than 30 years, and he’s now the senior newscast director at KLAS TV in Las Vegas. He said the Shen Yun performance was much more incredible than he and his wife had expected, and the experience touched his heart.

“The music of the performance by the orchestra was amazing,” said Gonzalez about the full, live Shen Yun orchestra, which includes both Western and Chinese instruments.

Gonzalez said he was mesmerized by the interaction of the dancers with the digital projected backdrop behind the stage, with some of the dancers even appearing to jump in or out of the background.

He said the performance opened his mind to new and different ideas of what to think about Chinese culture. He also noticed that the culture was very spiritual.

Gonzalez said overall the message was very positive and beautiful, and he was glad to see Shen Yun was able to share certain parts of Chinese culture and history that are not permitted in China under the communist regime.

“It’s great, and I hope they keep doing it every year,” he said. “If I have the chance to come again, I will.”

‘It’s such a rich culture’

Amy Godsoe, who is director of operations at Ameli Dadourian Heart Center in Las Vegas, also attended the performance on March 8.

“I thought it’s just beautiful,” she said. “I love how expressive they can be with just small gestures of their hands, or their faces, or their movements, and how alive they are and how softly they land. It’s just so incredible, and it’s such a rich culture, and the costumes are stunning.”

Godsoe said she especially loved the dance costumes with the long and flowing sleeves. She said the performers were very beautiful and poised, and she could tell they had a lot of confidence and respect for themselves and others.

She also said the Shen Yun artists were so expressive that she felt like she was a part of the performance itself.

“You can feel happy, or sad, or excited, or relaxed. It’s just stunning,” she said. “I’m just here letting it wash over me and experience it. I love experiencing new cultures and new styles and it’s a great opportunity to see something like this.”

Godsoe also thought the lyrics of the soloist singers were beautiful, and she was happy to witness such a touching performance.

“I was sitting here thinking how fortunate I am to live in a country where we can openly experience different religions or spirituality, and how moving it is for someone to step out and to be bold enough to express themselves,” she said.

One dance vignette that particularly struck Godsoe was a story where a woman was abused in prison for her faith.

“It was just very moving,” she said. “Then to see her find enlightenment and healing through meditation and faith.”

Godsoe said she would recommend Shen Yun “very much.”

“To be able to welcome a production like this and to see it, it’s truly a gift.”

With reporting by Jana Li, Marie-Paul Baxiu, and Sarah Le.