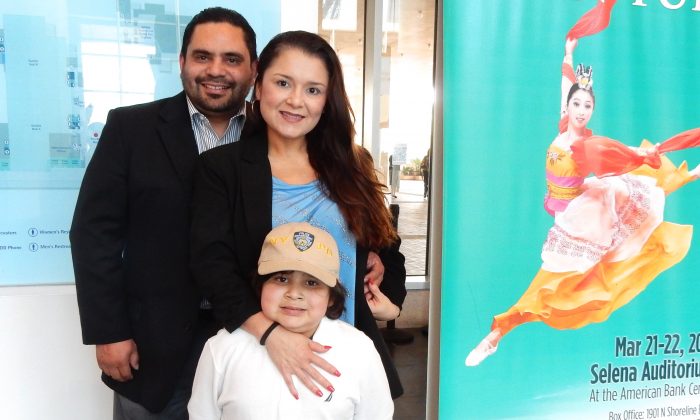 CORPUS CHRISTI, Texas—Sada Salazar and husband Michael Mendoza were happy to finally have a chance to see Shen Yun Performing Arts after the world’s premier classical Chinese dance and music company made its inaugural performance in Corpus Christi. The couple attended the performance with their son, on March 22, at the American Bank Center Selena Auditorium.

“I love it, everything. The music, the costumes, the flow of it, it was extraordinary,” said Mr. Mendoza, a doctor of internal medicine.

“My son has been wanting to see it since he was 4, so we finally made it and [Shen Yun] finally came here. We would come back again for sure, the stories are great. I mean, even my son can tell what they were saying, and he’s 5,” said Ms. Salazar, who owns her own consulting company.

Mr. Mendoza added that the show was spiritual, and he said he enjoyed the story lines in the performance.

“It’s enjoyable and for the whole family. It was great.”

Based in New York, Shen Yun has a mission to revive China’s divinely-inspired culture. The company’s performances feature classically-trained dancers performing the demanding flips and turns of classical Chinese dance, as well as ethnic and folk dances. The productions also feature original music performed by a live orchestra, hundreds of hand-made costumes, and breathtaking digital backdrops.

‘Inspirational—It touches your heart and soul’

“It was just the most uplifting and gorgeous performance by the orchestra, the principal dancers—the whole company, the soloists—it was just amazing, it was beautiful,” she said.

She felt the dancers were so adept at expressing the inner meaning of the dance and their beauty within.

“You don’t need words to see it, and they did it beautifully.”

Ms. Ramirez added that the music accompanying the dances, performed by the Shen Yun Orchestra, was in perfect harmony with the dances.

“That was the biggest performance of all, the crescendo and the music would go up when you can feel it and the dancers would leap through the air so gracefully, and they blended beautifully together. It was an outstanding job.”

The animated digital backdrops, projected behind the dancers, was also very unique, she added.

“I have never seen anything like that, it was so intertwined with what’s going on, the music, the dancers, the stories they were trying to portray.”

Ms. Ramirez’s husband Richard agreed with his wife, and invited everyone to come and see Shen Yun.

“We love the show, it’s great. Everybody should have an opportunity to see this,” said Mr. Ramirez.

Ms. Ramirez added, “It touches your heart and soul.”