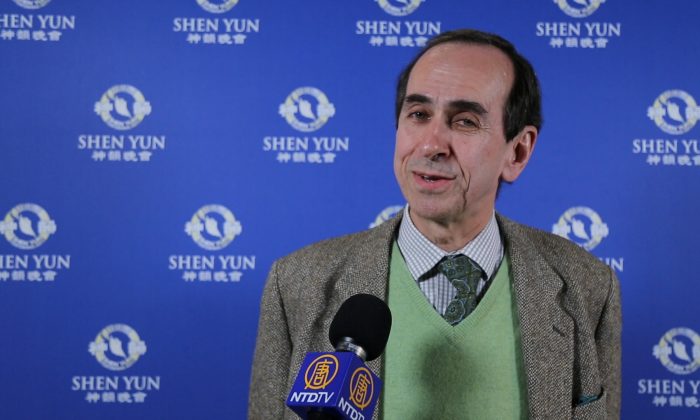 “It’s lovely; a lot of flexibility, and a smooth grace … the two form a whole that is absolutely magnificent,” Fabre said.

Classical Chinese dance is, alongside ballet, one of the most complex dance systems in the world. Refined over the millennia, its physical form is known for both dynamic and expressive, including tremendous leaps and aerial techniques that later inspired sports such as acrobatics and gymnastics. But it is also differentiated from other dance forms with its focus on the artist’s bearing, or the expression of their inner state, thoughts, and feelings.

It’s a difference difficult to describe, but can be felt immediately in seeing the artists on stage.

“We feel it in the grace of the movements, and in the choreographies, down to the smallest details,” Fabre explained.

And tied up in this art form, which was passed down through the dynasties, is the essence of the traditional Chinese culture that Shen Yun artists are trying to revive. China was once known as the Celestial Empire, and its culture believed to be divinely inspired.

Though such spiritual expression is not allowed in communist China today, Shen Yun tours the the globe every year since its inception in 2006, to share the history, stories, and art of 5,000 years.

“I think that is a very good thing. China has many talents, and a civilization that is older than ours,” Fabre said, pointing out dances that showed palaces and stories from the 7th century, or the 2nd century, and even older.  One dance, for instance, showed the beauty of the Tang Dynasty, which was considered China’s Golden Age.

“There is an absolutely breathtaking civilization … when the different kingdoms were unified,” Fabre said.

This was a culture, and a people, that believed in respect for the divine and harmony between heaven, man, and earth. From the very first dance of the program, the audience dives into a world where such divinity is intrinsic to the culture of 5,000 years.

“I think we feel it, and I think that indeed, the Chinese Communist Party must not like what it cannot control, very much, in fact,” Fabre said, referring to the fact that Shen Yun cannot perform in China, where there is no freedom of belief under the communist regime.

But for now, for the rest of the world, it is a gift.

“A wonderful retrospective of Chinese civilization, and the grace with which it moves,” Fabre said, summing up the production.