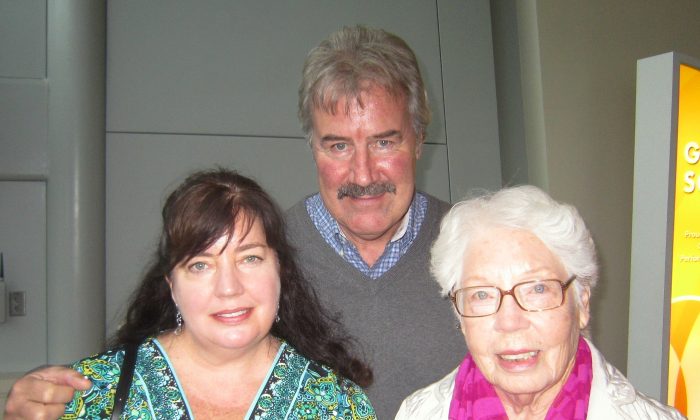 Staged at the Cobb Energy Performing Arts Center, he attended the afternoon performance of classical Chinese dance and music on Jan.3 with his wife Joanne and mother-in-law Laurette Smith.

“It is very entertaining,” Mr. Pugh said. “I like the music and the color, and obviously the performance.”

Based out of New York, Shen Yun was launched in 2006 with a mission to revive China’s 5,000-year traditional culture, desecrated by 60 years of communist rule.

The Shen Yun website states, “Shen Yun’s mini-drama pieces draw upon stories and legends that span China’s history from the Yellow Emperor and through the Tang and Song dynasties and all the way to the modern day.”

As a writer Mr. Pugh appreciated the mini-drama pieces. “The storytelling is good. I like the myths and legends—and the historical side of it,” he said. “How they interpret modern day and then back to the traditional side-it works.”

With state-of-the-art graphics technology, Shen Yun brings breath taking landscapes and heavenly realms to the stage, adding an extra dimension to the performance.

“It is amazing how they blend the dancers in the background,” Ms. Smith said with a chuckle.

“It definitely enhances, tells the story better,” Mr. Pugh said of the interaction of the dancers with the digital state-of-the-art backdrop. “The choreography is very good.”

Mrs. Smith was particularly amazed with the story dance The Fable of the Magic Brush, and so too her son-in-law.

“I thought the imagination involved in that, just the story itself was very good,” Mr. Pugh said.

Ms. Pugh appreciated all aspects of the Shen Yun performance.

“I think it is fantastic, just beautiful—absolutely beautiful,” she said.

The Chopsticks Dance of the Mongolian Ladies was a stand-out for her, as well as the other Chinese ethnic and folk dances representing different regions of China.

“I thought with Tibet, and the monks, and the court yard … I thought it was beautiful,” Mrs. Pugh said.

“I can feel the connection,” he said.