Shen Yun A World Beyond Expectations 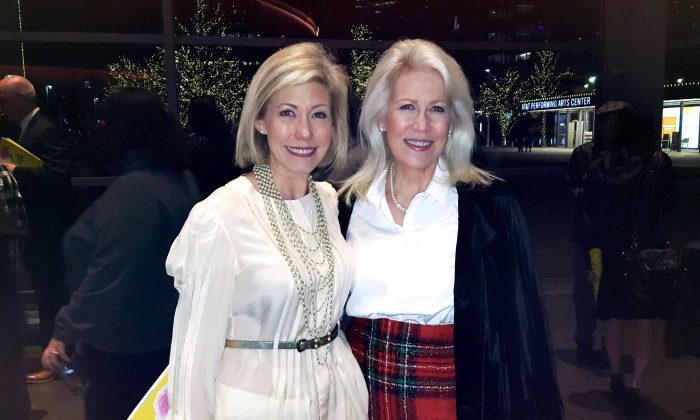 Mrs. Collins-Bratton, former FOX news journalist who currently manages public relations for the Methodist Health System, had done her research. She wanted a performance that would appeal to her mother’s dance background—classical ballet with an interest in all other forms—and she wanted to see something colorful and grand. Plus, the reviews promised much would be had from a Shen Yun performance.

The evening at the Winspear Opera House met all her expectations, said Mrs. Collins-Bratton. She described it as “very visually breathtaking. It was a feast for the eyes,” she said. It was also unexpectedly more fun, light-hearted at times, and even comical in many scenes.

New York-based Shen Yun aims to revive 5,000 years of traditional Chinese culture, and Mrs. Collins Sanders said they had been expecting traditional in the Western sense initially; something more serious and maybe even solemn.

“But why should it be? And I was thinking as we were watching it, how little we know of the Chinese culture in the West. It’s been fun learning, seeing from thousands of years old to more recent [stories],” Mrs. Collins Sanders said.

With a background in philanthropy, Mrs. Collins Sanders, is the director of development at the University of North Texas, College of Visual Arts and Design, and is in charge of raising support for programs like the world renowned Texas Fashion Collection. With her keen eye and dance background, she pointed out patterns and usage of color, the predominance of yellow, and the different characteristics of the performers in different dances. It was “exquisite, lovely, colorful,” she said.

Shen Yun performs classical Chinese dance as well as folk and ethnic dances that have been adapted for the stage, according to the company’s website. Because classical Chinese dance is a form that emphasizes the inner spirit—essentially requiring dancers to embody their characters, according to the website—this expressive form can accurately capture the feel of a region or ethnic group in the dances.

In one lively folk dance, the female dancers throw sparkling handkerchiefs into the air, immediately propel into forward flips, then catch the handkerchiefs again boomerang-style after the aerial feat.

“I loved it because it gave the girls, the dancers, a little bit of freedom to have movements in their hips. Some of them were a little bit sassy with their hips, it was cute,” Mrs. Collins Sanders said.

She said she knows how limiting it can be to perform with a prop, even as the dancers were “exquisitely trained,” because it becomes so demanding of accuracy.

Classical Chinese dance training requires mastering several difficult tumbling techniques, like flips, spins, leaps, and more. It is similar to martial arts in the sense that the dance form evolved alongside it through thousands of years in China, and it is where modern acrobatics and gymnastics originated from.

What stood out was how Shen Yun depicted aspects of humanity like comedy and spirituality.

She described the pantomime-like facial expressions and movements in a fight between a sea turtle and the Monkey King, the dismay of the Undersea King, and how humor was found even in a piece depicting monks of a Buddhist temple and Red Guards during the Cultural Revolution in the 1960s.

In addition, there was a spiritual aspect of China that the mother and daughter were not aware of that was brought out in the performance.

Mrs. Collins Sanders said spirituality was atypical in Western performances, but the way Shen Yun addressed it felt like an homage to their religions.