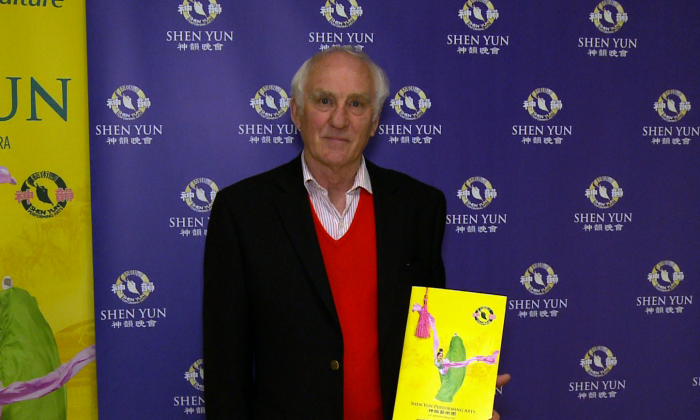 Radio host Tom Quick had high praise for Shen Yun Performing Arts at Centre In The Square in Kitchener-Waterloo on May 6, 2016. (NTD Television)

KITCHENER-WATERLOO, Canada—Radio host Tom Quick was thrilled to discover the music of Shen Yun Performing Arts at its concert last October at Roy Thomson Hall in Toronto, and on Saturday night, May 6, the classical music connoisseur was just as delighted by the dance presentations of the classical Chinese dance and music company.

“I love the music. I enjoyed the orchestra in Toronto last year and I enjoyed them tonight. The dancers were phenomenal. The coordination, the choreography was just immaculate. It was a great show,” he said after seeing the Shen Yun performance at Centre in The Square in Kitchener-Waterloo.

[The orchestra] was perfect. It gave everything an atmosphere, it was very descriptive of what was going on.
— Tom Quick

He has been broadcasting the music of the Shen Yun Orchestra on one of his shows, in fact.

“I’ve been broadcasting the orchestra for the last four or five weeks, so I’ve had the opportunity to listen to the orchestra and to get to understand or to get to know some of the traditional instruments, which are not always familiar to western listeners,” he said.

The orchestra of New York-based Shen Yun is unique in its ability to combine two of the world’s greatest classical music traditions. “Ancient Chinese instruments such as the soul-stirring erhu and the delicate pipa lead the melody on top of a full orchestra of Western strings, percussion, woodwinds, and brass,” explains the Shen Yun website.

Tonight, having experienced the music as accompaniment to dance, Mr. Quick was very impressed.

“I found that the music was very descriptive. It painted the picture and coordinated with what was going on. So the dancing and the music was such a great combination—very impressive.”

His compliments were also directed at the synchronicity of all aspects of the performance, from the music and dance to the costumes and storyline, from the lighting and props to the digital backdrops that provide vivid animated settings while extending and transforming the stage.

In some of the dance stories, characters can be seen seamlessly arriving on stage from the background scenery.

“Absolutely incredible, very good,” Mr. Quick said, noting that “the screen where the people came out of the heavens—was perfect timing.”

He had special praise for conductor Chia-Chi Lin and would like to include her in one of the shows he hosts that showcases the talents of female composers, vocalists, and instrumentalists.

“I’m very impressed,” he said. “If I ever come across her conducting [in a DVD], then I will incorporate her in my radio broadcast, which is called ‘Women in Music.'”

“I thought it was wonderful,” Mr. Quick said of the orchestra. “It was perfect. It gave everything an atmosphere, it was very descriptive of what was going on and the music was telling the story, so I thought everything together was just excellent.”

He also complimented pianist Yi-Chin Lin. “The pianist, who quite often never gets recognized because she’s out in the back, she was wonderful, wonderful pianist,” he said.

‘Music for the Soul’

Mr. Quick also took note of Shen Yun’s bel canto soloists and their songs, which are rich with touching reflections of the meaning of life. Their lyrics, like the dance and orchestral music, collectively speak to the mission of Shen Yun—to revive the traditional culture of China, whose essence is based on a deep foundation of belief in virtue and faith in the divine.

The masters of ceremonies had explained the connection between music and healing in ancient China, and that resonated with Mr. Quick.

“[It] was mentioned that in China, many, many years ago, music was used for healing, and I am a firm believer of that,” he said. “Music soothes the soul.”

He noted that the songs of Shen Yun would be very well suited to a radio broadcast called “Music for the Soul” that he does for another radio station.

On the whole, he thought the performance was excellent.

“There’s a word which people use called ‘awesome,'” Mr. Quick said. “People never use it for its great description, but this was a totally awesome program tonight.”