Resounding Harmonies From One Ancient Culture to Another 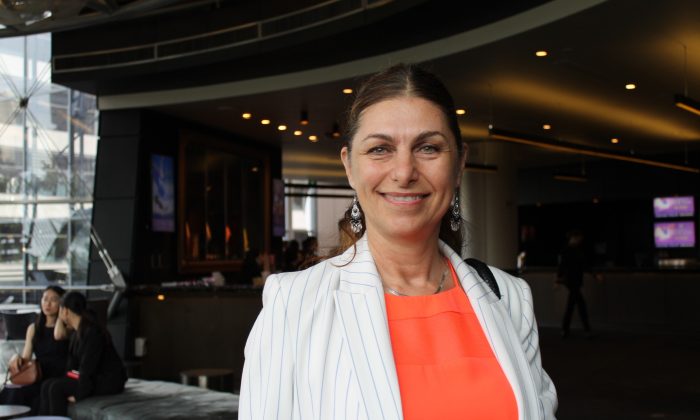 SYDNEY—It was through the mini-drama tales of Shen Yun Performing Arts that Stavi Tsioustas was able to experience and connect with traditional Chinese culture and discover new-found parallels with her own Greek heritage.

Tsioustas, a management consultant of property for the NSW Government, was very impressed after watching Shen Yun.

“Last year I missed out on seeing the show but this year I brought my parents. They are both in their early 80s so I wanted to share a different culture with them because we have a European background,” Tsioustas said at the Sydney Lyric Theatre on March 10.

Tsioustas said that she was in awe at how the dancers were able to convey their inner emotion in every story they performed. She attributed it to the bearing, or “yun,” of the dancers—a feature of classical Chinese dance that can best be described as the inner spirit, including breath, intent, personal aura, and deep emotional expression.

“There is so much joy and you can see it on their faces. The performers, their smiles; they’re spreading love through their performance. There is just a genuine appreciation that they are obviously offering more than just a performance,” she said.

“I was actually emotional a couple of times in some of their stories that were being depicted,” Tsioustas said.

Having New York-based Shen Yun provide an introduction to traditional Chinese culture on a very personal level was the ultimate highlight for Tsioustas. There was also a strong duality in her experience.

On one hand, it was a fresh experience. Tsioustas said, “I just found it so refreshing. I found the female performing on the Chinese instrument [erhu] just amazing. I just thought, I’d love to have just that at home, listening to that in the background.”

Yet on the other hand, the underlying similarities between Chinese culture and her Greek culture began to surface. Tsioustas said the moment when she saw the familiar in the new, she felt a broadening of her view and a new-grown appreciation and understanding for Chinese people.

To provide this deep sharing of China’s divinely-inspired culture, Shen Yun brings to life ancient stories on stage, such as ‘The ties of affection, the Tao of Destiny,”  for which Tsioustas said evoked a deep sense of nostalgia and empathy in her.

The closeness of family, the disapproving of parents in a forbidden marriage, and many other themes struck a chord with Tsioustas and her Greek heritage.

Tsioustas left Shen Yun feeling grateful for its efforts to bring about a revival of China’s traditional culture.

“I think it’s very important. It’s no different to the Greeks,” she said.

The experiencing of new cultures is what Tsioustas considers respectful and truly enriching to a person.

“I’ve actually had numerous conversations with Greek people and they’re very proud of their heritage. And then it’s interesting because I always challenge someone who says that Greek history is just the history … and I say, ‘Hang on a minute, what about the Asian history?’ I’m sure they go back further.”

“It’s really important that we express our culture to others because I think that brings respect. You honor what that culture has to offer, and I think this is just beautiful,” Tsioustas said.

With reporting by Nicole Hond.