Physician Transported by the Magic of Shen Yun 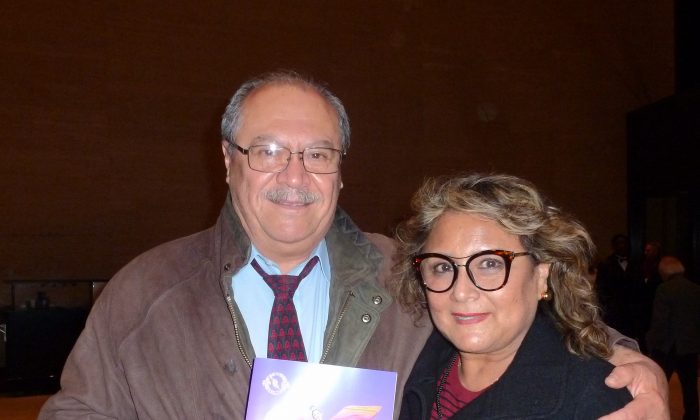 Dr. Hernan Miranda and his wife, Mimi, enjoyed Shen Yun at the Jones Hall for the Performing Arts, in Houston, on Jan. 15, 2019. (Sonia Wu/The Epoch Times)

HOUSTON—Dr. Hernan Miranda is a practicing physician. He attended Shen Yun Performing Arts with Mimi Miranda on Jan. 15 at the Jones Hall for the Performing Arts in Houston, Texas.

The pair was impressed.

“Excellent quality,” said Mimi Miranda after watching Shen Yun perform. “Not only the scenes, but the dance, the music the colors. It is a beautiful experience—it is very beautiful. And this is the second time I’ve come to see it,” she said.

Formed in New York in 2006, each year Shen Yun Performing Arts travels the world with a new production with new stories of China’s 5,000 years of civilization. Many audience members return to see the new productions, bringing loved ones to see it for the first time.

“It was extraordinary,” said Hernan Miranda. “The perfection, the choreography, how coordinated everything was. The work that the director must have put in to have all the performers in line and doing such vigorous movements—at the same time—so elegant.”

“I was so pleased,” Mr. Miranda continued. “I was just admiring each one of the pieces, saying, ‘Wow! This is like the French cuisine that they serve you. Just a little piece, but it is perfect, it is rich, it is enough.’ It was beautiful.”

“And also the inclusion of technology,” added Ms. Miranda. “You know, the way it is incorporated in the background. The digital images that become a part of the scene, it’s just wonderful!

Shen Yun performances feature backdrops that display moving scenes. The dancers appear to the audience to move in and out of the lands that are displayed.

Mr. Miranda said, “The passage of the actors from the real scene where they’re performing into the screen, into the film, into the background—that’s only magic. But it was so realistic that I just had to blink once, and I was transported to a place that is much bigger than the little place where we are now. We were in the field, we were in the lake, we were in the mountains, and enjoying all this art that is extraordinary.”

“I wish more people can see this and appreciate,” Mr. Miranda said. “This is a tremendous quality. I enjoyed this so much.”

The two have already recommended Shen Yun to their family members.

Mr. Miranda said he hopes that more people can have the opportunity to see Shen Yun and the quality, artistry, and work it requires to produce it.

“This is an extraordinary work,” said Mr. Miranda. “My great congratulations to [Shen Yun] and each one of the directors.”

With reporting by Sonia Wu and Carrie Gilkison.