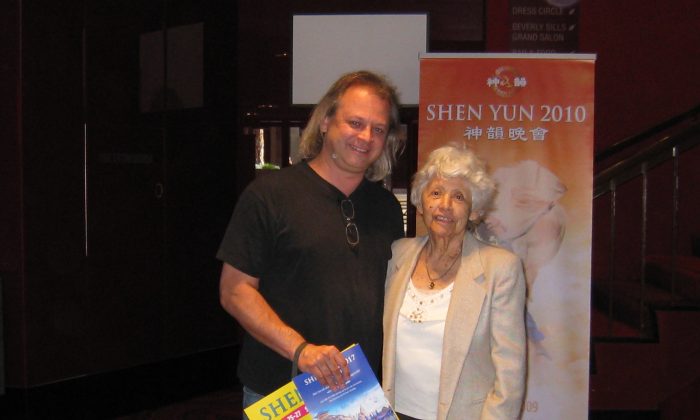 Both mother and son were highly impressed.

“Magnificient. There is not anything that is equal,” his mother said of Shen Yun. She, similar to her son, was amazed by Shen Yun dancers’ precision. “I doesn’t look real because it’s so perfect,” she said, adding that the dancers don’t seem human.

Shen Yun is a New York-based, non-profit classical Chinese dance and music company that travels to 100 cities in 20 countries across five continents for almost six months each year.

Indeed, “flawless” is a word often used by audience members to describe Shen Yun. Shen Yun artists spend countless hours perfecting their craft both on and off their tour throughout the year.

A single performance includes approximately 20 vignettes that bring to life ancient Chinese culture, which is thought to be divinely inspired.

As a professional bass guitar player, Mr. Jermstad was impressed by the erhu solo.

“I really love the erhu performance,” he said. “Beautiful. Beautiful instrument—similar to a violin, but a different sound.”

The erhu is a 4,000-year-old, two-stringed instrument that produces a wide range of highly expressive sounds. Shen Yun’s website states that the erhu’s melodies can be tender and sonorous or “stirring and somber, a quality eminently suitable for conveying the grand pageant of China’s history and the emotions of its people.”

“It really does tell a story, doesn’t it,” Mr. Jermstad said of the instrument.

Shen Yun’s mission is to revive traditional Chinese culture, which was replete with values such as veneration for the divine, respect for parents, loyalty, sincerity, and courage.

Two pieces of the performance are set in modern day China, and they depict spiritual believers’ steadfast faith in the face of violent persecution.

“So that’s wonderful that their production is like this. They can keep it alive,” he said, referring to Shen Yun artists’ efforts to maintain and revive traditional Chinese values.