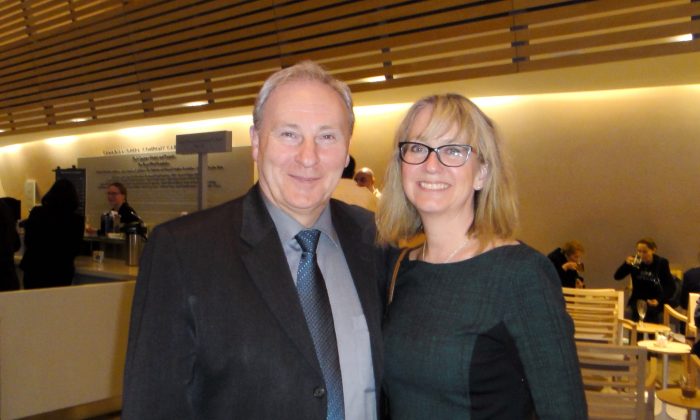 Jamie McGarvey, the mayor of the town of Parry Sound, and his wife Alison Scarrow, executive director of the Festival of the Sound, enjoyed Shen Yun Performing Arts at the Four Seasons Centre on the evening of March 30, 2019. (Dongyu Teng/The Epoch Times)

TORONTO—Jamie McGarvey, mayor of the town of Parry Sound and the president of the Association of Municipalities of Ontario, thought Shen Yun Performing Arts was fantastic after seeing the company’s performance at the Four Seasons Centre on the evening of March 30.

“The music, the colors, the dancing—it’s absolutely fantastic,” Mr. McGarvey said. “Absolutely wonderful, they did a wonderful job.”

Commenting on the different aspects of the performance, Mr. McGarvey said he enjoyed the music performed live by Shen Yun’s orchestra, the animated backdrops that interact with the dancers on stage, and the talent of the dancers.

A performance like Shen Yun takes a lot of effort and practice, Mr. McGarvey noted, and he admired the artists’ dedication.

“What they do is an art and it’s all part of one collage of music and dancing and color coming together so I appreciate their dedication and hope they continue to do what they’re doing.”

Mr. McGarvey praised New York-based Shen Yun’s mission of reviving China’s rich culture, and said he “listened to the message that they’re putting out there, and good for them.”

Mr. McGarvey’s wife, Alison Scarrow, said she had previously experienced a Shen Yun Symphony Orchestra performance before, but never a Shen Yun Performing Arts production which features classical Chinese dance and a variety of other performances.

“The dance is absolutely magnificent. It’s beautiful, I love it,” she said. Ms. Scarrow is the executive director of the Festival of the Sound, an annual classical music festival held in Parry Sound.

Ms. Scarrow praised the talent of the Shen Yun performers, saying she noticed the footwork of both the male and female dancers “and it’s just gorgeous, brazen beauty and strength.”

She also said it’s important for Shen Yun to share China’s rich culture with audiences around the world.

“I think it’s really important to share the culture, share the art, and the beauty of the music and the dance. It’s wonderful,” she said.

Rob Wood, operations manager of the Festival of the Sound, said he enjoyed the music, colors, and the backdrops in Shen Yun.

Commenting on the combination of traditional Chinese instruments with classical Western instruments in the performance as well as other aspects of the performance, Mr. Wood said Shen Yun has a “great blend of a lot of different elements, and it’s something that I’m going to remember for a long time.”