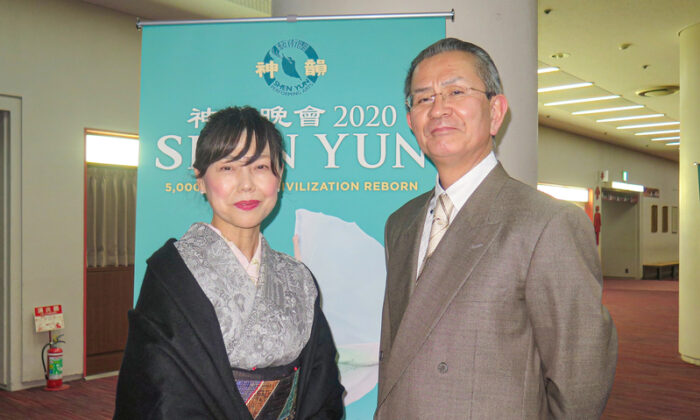 FUKUOKA, Japan—Eguchi Mitsuru is a principal of a high school in Japan’s Fukuoka City, who loves dance and often went ballroom dancing along with his wife in their spare time. The couple was marveled by Shen Yun’s exquisite performance of classical Chinese dance when they attended Shen Yun Performing Arts New York Company’s fourth performance at Fukuoka Sunpalace Hall on the evening of Jan. 22, 2020.

“Originally, I just wanted to come here to check out the dance performance [by Shen Yun],” said Eguchi Mitsuru. “It turned out that this is a high-level performance.”

“It is so beautiful,” she praised. “Their skills are really very high that they are practically beyond the limits of the human body.”

“I just can’t believe that we humans can do such difficult moves,” she exclaimed.

“The erhu sound is so beautiful as if it were human’s sympathetic and touching voice,” she continued. “It’s our first time to see the fusion of Chinese and Western musical instruments. And the melody of erhu is still lingering in my mind.”

“Since Shen Yun Performing Arts showcases China’s semi-divine culture, many onstage scenes include immortals and deities, such as Buddhas and Daos,” according to Shen Yun Website. “From myths and legends to works of art, the depiction of these divine beings in Chinese lore has endured throughout the centuries.”

“I perceived the existence of divine beings in several pieces,” Mrs. Eguchi added.

“Yes, there are spiritual contents in the show,” echoed the middle school principal.

The website also explains: “Inspired by 5,000 years of history, our designers create vivid animated settings that truly reflect China’s multifaceted geography, society, regions, and dynasties. Some scenes even transcend this world, bringing you a touch of the heavens.”

Mr. Eguchi noted that he read about the unique background being patented.  “[Shen Yun] really deserves its reputation,” he added.

Mrs. Eguchi Mitsuru was deeply moved by a piece depicting Chinese Falun Gong adherents’ great compassion and perseverance regardless of the severe persecution perpetrated by the Chinese Communist regime in China. It is a spiritual meditation practice that many of the Shen Yun artists follow themselves.

I “can understand that it is exposing the atrocities of the Chinese Communist regime,” she said. “I really admire the courage of Shen Yun Performing Arts.”

“Watching Shen Yun has changed my stereotype about Chinese culture,” she noted. “I didn’t know the value of traditional Chinese culture until today.”

After knowing, from the emcees’ introduction, that Shen Yun still cannot perform in China, the school principal felt it is lamentable.

“It is a pity that Shen Yun still cannot perform in China,” he said. “I hope that Shen Yun can tour all over the world, including China.”

“With Shen Yun’s influence, the world will become more peaceful and beautiful,” he said.

With reporting by Chen Yinghua and Billy Shyu.