‘I loved it’ Says Publisher After Watching Shen Yun 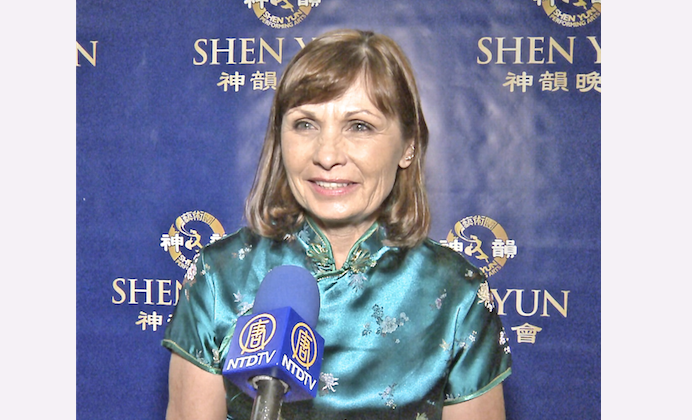 Ms. Kline, dressed in a royal blue, traditional Chinese blouse, was enthralled by the performance.

Established in 2006, New York-based Shen Yun is a non-profit organization dedicated to bringing China’s 5,000 years of divinely inspired culture to life through the performing arts. Having reached millions of people across some 20 countries and over 100 cities, Shen Yun is now widely recognized as a global phenomenon.

“[This] was really fantastic,” added Ms. Kline, showing her admiration for the performance’s mini-drama pieces.

“I’d like to learn more about the stories behind some of the dances and the songs.”

“According to the Shen Yun website, “In less than ten minutes each, Shen Yun dances recount ancient myths, bygone heroes, or celestial paradises. Whether set in the past or in contemporary China, every dance embodies traditional Chinese values. Ideals of loyalty, filial piety, and veneration for the divine are cherished and celebrated.”

Ms. Kline was particularly impressed with the state-of-the-art digital backdrops.

“I like the way they integrated the backdrops,” she explained. “That was pretty amazing too, how it looked like the characters came right from the screen, onto the stage.”

As stated on the website, “These digital backdrop designs complement and synchronize all aspects of the performance: the characters, color of the costumes, specific dance movements, props, lighting, the story being told, particular notes played by the orchestra, and special audio effects.”

In Ms. Kline’s opinion, Shen Yun is a “must see” for anyone.

“Oh, they have to see it,” she exclaimed. “Especially my daughter, who’s into dancing, she definitely needs to come see it.”

Shen Yun Performing Arts New York Company will be performing its final show in Tempe on Sunday, before moving on to Costa Mesa, CA.