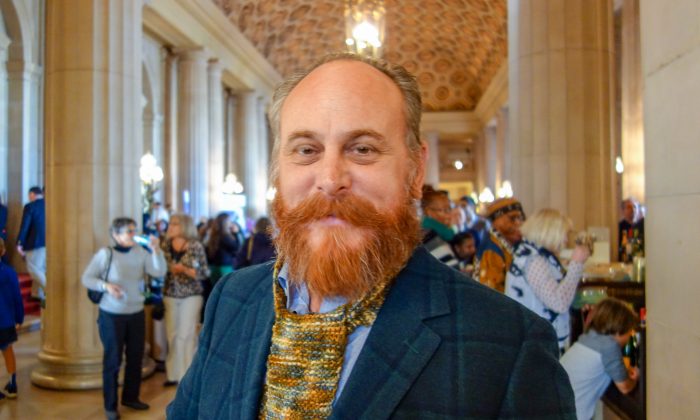 “It’s beautiful; the costumes are great; [the] music sounds great. … I think it’s really cool,” he said. “I’ve been a commercial director for almost 25 years, so I can appreciate the magic.”

“The dancers are great,” he said. “The women are phenomenal, just how fluid their movements are. They’re very graceful.”

He also admired the male dancers’ athleticism. Classical Chinese dance is an ancient dance system that includes many difficult flips, leaps, and tumbling techniques, besides being graceful and expressive.

Two of the dance pieces that particularly stood out to Bouverat were “Porcelain in the Balance,” in which women balance pottery on their heads while dancing, as well as “Restaurant Cheer,” a humorous dance set in a restaurant scene.

“The scene in the restaurant was really fun to watch,” he said. “I’m glad we’re here.”

Each Shen Yun dance performance includes classical Chinese dances, ethnic and folk dances, and dances that portray legends and stories from China. Bouverat thought the culture expressed in the performance was very good.

“The emotion gets carried through the dance and the music, and that’s good,” he said. “It makes me interested in learning a little bit more.”

The dancers are accompanied by a unique live orchestra that combines both Chinese and Western musical traditions. In addition, singers perform vocal solos in Chinese using the traditional bel canto technique.

Bouverat admired the beauty of the song lyrics, which are translated into English on the backdrop. According to Shen Yun’s website, these original lyrics contain deep meaning that transcends cultural boundaries.

“It’s beautiful and emotional,” Bouverat said of the lyrics.

David Gurley, a general contractor, attended the performance with his family.

“It was magnificent,” he said. “I thought that the creativity in creating the costumes was unprecedented. It was just exquisite. The dance choreography was superlative.”

What especially stood out to him was “the physical prowess of each of the performers.”

“It’s phenomenal to be able to do a show that’s two and a half hours long with their mouth closed,” he said. “It was just tremendous.”

“It’s splendid to understand more about so much of Chinese culture, because as one of the oldest cultures on the planet, to learn more about the intricacies and the development and the history of the culture is just delightful,” he said.

Shen Yun’s website explains that traditional Chinese culture is known as “divinely inspired.” Faith, respect for heaven, and other spiritual concepts and moral values are important in ancient Chinese tradition. In modern China, however, the communist regime has stripped the culture of this spiritual essence.

“That’s one of the things I think that we don’t see in the West,” Gurley said of the spirituality in Shen Yun. “We see communism; it’s the face of China. And there’s some exposure to the older dynasties with these beautiful works of art, but there’s not that much that’s available today, as far as the face of China and of Chinese people, outside from under the umbrella of the Communist Party.”

He thinks the traditional values are “very, very important.”

“It shows in this production … that somebody has taken, the producers have taken, and the creators of the presentation and the performers have all taken, extreme pains to bring the spirituality back onto the stage,” he said.

Local politician Karen Cunningham enjoyed Shen Yun on the same day. She appreciated the beauty of the spirituality in Shen Yun.

“What I was feeling was the spirit and the energy of the dancers … and I know they’re obviously very much in love with what they do,” she said.

In China, those who hold spiritual beliefs are often oppressed by the Chinese communist regime. The Shen Yun dance piece “Goodness in the Face of Evil” tells a story about a persecution that is happening in modern China.

“It’s very difficult for any country that has got any kind of persecution,” said Cunningham. “I’m glad that they can express it here.”

With reporting by Mary Man, Mark Cao, and Sally Appert.