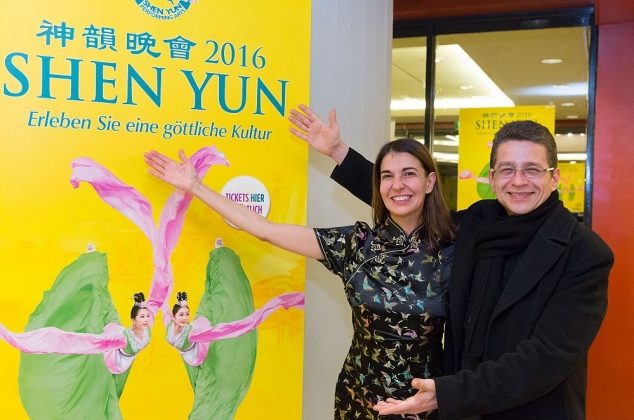 FRANKFURT, Germany—Frankfurt’s Jahrhunderthalle, a favored venue for many of the world’s well known performers and performances, has also been the chosen venue for the New York-based Shen Yun Performances since they first toured in Europe nine years ago.

Shen Yun has been welcomed by the Germany public year after year because it features the world’s foremost classically trained dancers, a unique orchestra blending East and West, and amazing backdrops.

Ms. Florence Weis-Le Guehennec, a former ballet dancer who was born in France and is now employed in the banking sector, and her husband Mr. Marcel Hofbauer, an engineer, were drawn to Shen Yun by “spectacular advertisements.”

Because of the advertisements, Ms. Weis-Le Guehennec expected a dance performance and was surprised to see a “diverse presentation that enriched her experience. There was so much more she had not expected, including the orchestra, the songs and then the scenes that depicted some of China’s 5,000 year culture” that made this show an exceptional experience.

This was not all that made the show different from what was expected. She was deeply touched when she saw the scenes about the “suffering and suppression” of Falun Gong practitioners and said, “One could feel in the performance the pain experienced by the Chinese people. I lack the words that can express what I truly felt during those scenes.”

However, the message that she will take home with her is “that there is hope” and that in the end all issues, “good or bad” will be resolved.

Mr. Hofbauer could not agree more. “In the end there is the hope for the future of the Chinese people.” This message is growing in strength “because the ancient traditions and culture” are maintained outside of China and will not be lost.

It was amazing that this hope is not because of “coercion, but presented with love and effortlessness,” said Ms. Weis-Le Guehennec. “That is the beauty of it all. This is what brings the spirituality in the show to the audience, which is very important.”

She continued, “Although the performers use modern technology, it does not detract from the message. It tells me that modern tools destroy the cultural heritage and people lose their roots. They no longer know the meaning of life.” But, it can and will be recovered.

What was most astounding to former dancer Ms. Weis-Le Guehennec was that “the performers cooperated with each other and none showed any sign of competitiveness. Every performer has the ability to show his or her abilities and yet they are connected into one.”

This impression was enforced by both the male and female performers. Everyone performed “smoothly and as one of the team. “This is a most important message to the entire world,” which both will take with them and keep in their heart.

Reporting by Yiyuan Zhou and Heide B. Malhotra