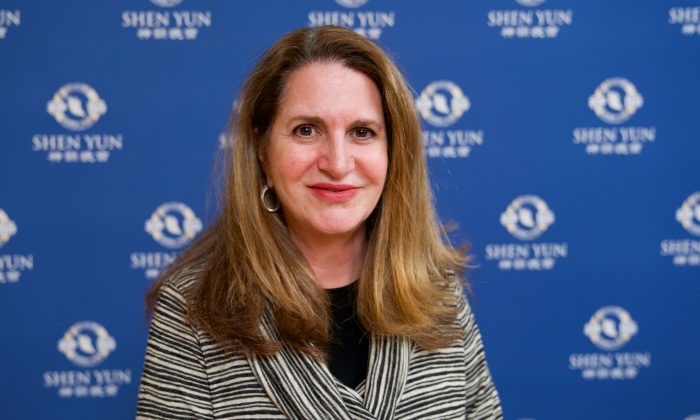 NEW YORK—Being a board member of the Martha Graham Dance Company, Lorraine Oler is a patron of the arts and has been delighted by many dance productions so far in her lifetime. One of these productions was Shen Yun Performing Arts, which she saw at The David H. Koch Theater at Lincoln Center on March 14.

Oler, who previously worked as an executive director in the financial sector, said she was extremely impressed by the classical Chinese dance and music performance, adding that she was captivated by the artistry of the dancers, distinct orchestral music, and the sheer size of the production.

“I thought it was spectacular. I thought the production value was splendid, the costumes were beautiful and colorful, the technique was perfect. Hearing that live orchestra was a real treat, and I think overall it was entertaining throughout,” Oler said. “I would say [Shen Yun] definitely strives for perfection.”

The New York-based company is in the midst of its 2019 tour, where six equal-sized companies are delighting audience members in sold-out performances across the globe. In its performances, dozens of dancers use classical Chinese dance as well as ethnic and folk dances to tell stories and bring back a semi-divine culture that was nearly lost after seven decades of communist rule.

The company’s name is unique. According to its website, Shen is a general term for a divine being, indicating the myriad deities, Buddhas, and Taoist immortals in Chinese spiritual traditions, while Yun means rhythm and conveys a person’s entire bearing. Hence, the name Shen Yun means the beauty of divine beings dancing, something Oler thought was fitting for the company.

“I definitely think it lives up to that name,” she said.

Oler also praised the performers for meeting a very high level of skill. She said, “I say your standards are extremely high and you meet those standards.”

Reviving A Culture That is Nearly Lost

Although Shen Yun draws its inspiration and stories from China’s culture and history, the company is unable to perform there, according to the emcees. And this fact has surprised many audience members like Oler.

“I did not realize until today that you’re New York-based and that you do have some opposition from authorities that maybe don’t believe in your mission,” she said.

She continued, “that was surprising to me. And from what I know about China I think they’ve embraced a lot of things that are freedom-based when it comes to the business sector. I think they have embraced capitalism, I’m really surprised that they seem to be behind the times in embracing religious freedom or the freedom to express yourself in the way that this company does.”

According to the company, one of the main reasons why Shen Yun is unable to perform in China is because the Chinese Communist Party (CCP) sees traditional Chinese culture, which is deeply rooted in Buddhism, Taoism, and Confucianism, as its greatest rival.

Over the past several decades, China has experienced many movements aimed at eradicating 5,000 years of civilization and traditional culture. From cultural sites and temples to ancient relics and people’s beliefs, much of China’s history and spirit were destroyed after the Chinese Communist regime seized power.

The most well-known movement is the Cultural Revolution, which occurred between 1966 and 1976. It was an unprecedented move to systematically eradicate traditional culture and replace it with Mao Zedong’s way of thinking and style of discourse.

Seeing that genuine Chinese culture was at its brink of being wiped out, a group of overseas artists was determined to bring back everything that truly defined the Chinese people. This was how Shen Yun was born back in 2006.

Oler said after watching the performance, she felt Shen Yun had broadened her horizon and exposed her to a culture she wasn’t as familiar with as she had thought.

“I am impressed to know there are that many talented young dancers in the city. It’s very impressive how large [Shen Yun’s] production is—a lot of dancers. The fact that [Shen Yun] was able to have such a long season here at Lincoln Center with a live orchestra is extremely impressive,” she said.