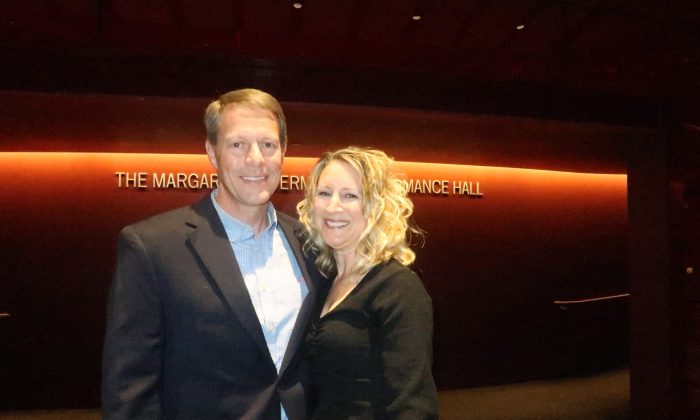 DALLAS—Shen Yun Performing Arts was in Dallas on Jan. 18, surprising and delighting the Texan audience.

Amy Ross is an executive recruiter and her companion, Steve Beran, is a quality director.

It was Beran’s first time seeing the Shen Yun.

“I love it,” said Beran. “I loved the colors, the way the dancers are all synchronized, and the grace of their movements, and everything.”

Beran recalled “Sleeves of the Tang Palace” which depicts China’s Golden Age, the Tang Dynasty, and the long water sleeves of the palace ladies.

“I liked the color in the sleeves dance,” he said. “And then the grace of the dancers and the way they can move around.”

Beran also recalled “Porcelain in the Balance” where Shen Yun dancers balance vases upon their heads with graceful ease.

Ross agreed, and said the feat was amazing.

Shen Yun was formed in New York in 2006 by artists who wanted to revive the traditional Chinese culture. Shen Yun depicts stories and scenes from throughout China’s profound 5,000-year history, and also includes stories set in China today.

Some of these stories openly depict the persecution and hardship faced by spiritual people in China today, at the hands of the communist regime.

“It surprised me. It was a nice surprise,” said Beran.

Beran had expected to see the spirituality of traditional Chinese culture, but didn’t expect the program would also touch on the fact that such culture is oppressed in modern China by the communist regime.

“I think it’s important to incorporate it into the show,” agreed Ross. “It’s good to know.”

Jorge Fredrickson is an executive in finance. He and his companion were also in attendance.

“It was very nice,” he said. “Extremely colorful, I was blown away by the colors.”

“I thought the integration of the digital realm with the physical realm was very interesting,” he said. “Visually, very stimulating.”

“The dancing was fantastic,” she said. “I really enjoyed the dancing. I’ve taken dance before, so I can appreciate the beauty of it.”

Fredrickson liked all of the stories, but one that stood out in his memory was “Sleeves of the Tang Palace” which depicts ladies of the Tang Dynasty, China’s Golden Age, and their flowing water sleeves.

“I thought it was very moving,” he said.

With reporting by Diane Gao, Amy Hu, and Carrie Gilkison