Company VP Found Truth in the Lyrics of Shen Yun 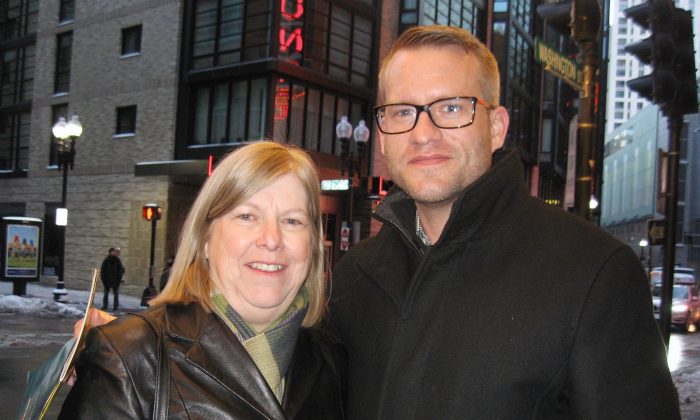 Kathy Krim and Reed Reynolds were in high praise of Shen Yun on January 24, 2016, at the Boston Opera House. (Kerry Huang/Epoch Times)

Shen Yun Performing Arts is based in New-York with a mission to revive traditional Chinese culture through music and dance. While classical Chinese is at the heart of what Shen Yun does, there are also mini-dramas, ethnic and folk dances and solo performances, singing in the bel canto form with perfect Chinese diction.

The Shen Yun website states, “The song texts the singers perform are original works written for these pieces. Brimming with philosophical reflection about human life and containing deep layers of meaning, the texts go beyond the boundaries of nation, race, and culture, and have been fondly received and appreciated the world over. Some audience members even express that Shen Yun’s vocal pieces are reminiscent of sacred music.”

One song’s lyrics, in particular, resonated with Mr. Reynolds.

“The universe is the Creator’s masterpiece, humans were made by gods at His command,” sang soprano Huang Li.

“It’s along the lines of what I believe in,” Mr. Reynolds said, “It talked about the truth.”

He attended the performance with Kathy Krim, who’s praise for the singing was just as high.

“The songs were beautiful,” Ms. Krim said, “I love the lyrics.”

The two enjoyed the entire program, but at the end they couldn’t help but walk away from the theatre feeling remorse for all those in China who are not able to see Shen Yun.

Shen Yun is banned from entering China because the Communist Regime is at odds with Shen Yun’s mission—to revive the 5,000 year old traditional Chinese culture. In fact, the communists have been systematically eradicating Chinese culture ever since the Cultural Revolution of the 60s.

“Very sad that they can’t do this in China, and that people can’t celebrate there,” Ms. Krim said.

“I hope that at some point, they can do this in China,” Mr. Reynolds said. But more than just perform in the mainland, Mr. Reynolds also said he hopes that people will be able to practice their beliefs freely in China.

China’s communist regime has been violently persecuting members of all religious beliefs and spiritual practices, especially the practitioners of Falun Gong—a peaceful meditation practice. In one dance, Shen Yun depicts the persecution of these practitioners who cultivate with the principles of truthfulness, compassion, and forbearance.