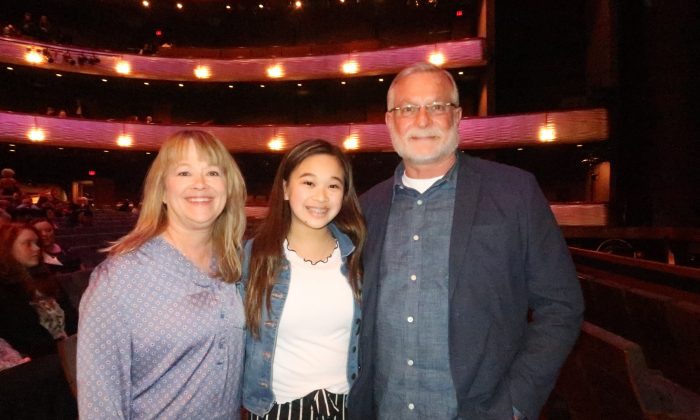 DALLAS—Rick Coon and his wife, Deena, have always been interested in Chinese culture. The ancient flowing dresses, the traditions and customs, the graceful dance movements, and the sheer beauty of such a grand civilization are only some of the things that have captivated their hearts. Their fascination for this divinely inspired culture was what brought them back to experience Shen Yun Performing Arts for the second time.

Coon, who is the president of Consolidated Rig Works, found the dancing unbelievable the first time he saw the classical Chinese dance and music performance five years ago. Shen Yun blew his mind once again when he saw it this year at Dallas AT&T Performing Arts Center–Winspear Opera House on Jan. 25, with his wife and their young daughter, who is ethnically Chinese.

“I’ll tell you what, it’s incredible. The costumes are beautiful, the storytelling is beautiful, and the dancing is … that’s really why we came, for the dancing,” Coon said.

The name “Shen Yun” translates into something meaning “the beauty of divine beings dancing,” according to the company’s website. The New York-based company uses classical Chinese dance as its foundation and incorporates a range of folk and ethnic dances reflecting the geography and styles of minority groups in China. This style of dancing has a history of thousands of years and was passed down continuously within the imperial palace and ancient Chinese theater and opera.

Classical Chinese dance is grounded in China’s divinely inspired culture and can bring out a dancer’s intrinsic thoughts and feelings. This style of dancing is rich with expressive power and audience members say they can easily experience the energy of the dancers.

This expressive power makes classical Chinese dance a suitable form to tell stories. Shen Yun features many mini-drama pieces that draw upon China’s myths and legends as well as historical records. A unique feature of Chinese civilization is that its history has been documented and passed down uninterrupted for 5,000 years, according to the company.

Coon’s wife, Deena, said she was particularly touched by some of the stories like the piece “Goodness in the Face of Evil,” which is a modern-day piece based on real-life human right abuses in China.

“It was such a great story, very touching and kind of grabbed your heart,” Deena said.

Many of Shen Yun’s story-based dances portray universal values such as benevolence and justice, propriety and wisdom, respect for the heavens, and divine retribution—which is what the company aims to revive by touring the globe. The performances try to inspire audience members and make them think about our role in the world today.

Meanwhile, Deena said her daughter, Grace, who is a dancer, really enjoyed her experience with Shen Yun.

“Part of the fun is watching [Grace] react. I was telling [my husband], she’s like ‘Wow mom look.’ It’s just splendid like she grabbed my hand, it’s just a fun experience for her,” Deena said.

With reporting by Diane Gao and Janita Kan.