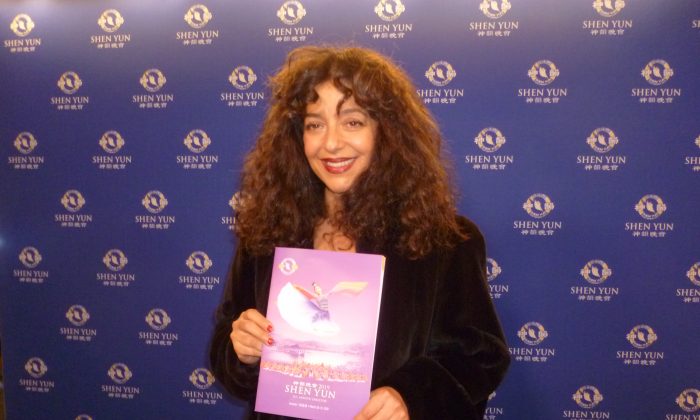 She was enthralled by the performance.

“I just am so blown away. It’s perfection. The virtuosity is incredible. It’s like you’re watching a dream,” she said.

Shen Yun, the world’s premier classical Chinese dance and music company, has set out to revive China’s divinely inspired culture on stage. Since its establishment in 2006, New-York based Shen Yun has performed for millions of audience members around the globe.

“The performances are moving, they’re brilliant, they’re dazzling. The storytelling was incredible. Even though they are not saying a word, you totally understand what is going on. The costumes were also out of this world,” Nesrallah said.

Nesrallah is an acclaimed mezzo-soprano, performing with opera companies, symphonies, and festivals internationally. She is also host of CBC Music’s classical radio program Tempo, as well as the executive producer and star of Carmen on Tap, a company that performs Bizet’s opera “Carmen” as dinner theater.

Nesrallah was impressed by Shen Yun’s tenor Tian Ge, who performed “The Way That Saves,” a reflection on human beings’ quest for the meaning of life.

“He just came out and gave you his heart and soul, and the crowd couldn’t help but respond with their own hearts and souls. It was just a lovely moment,” she said.

Shen Yun’s orchestra, which accompanied the dance performances, also resonated with her.

“I loved all the colors … I loved how perfectly tight they were. Usually when you hear live orchestra with theatrical performance, somebody makes a mistake. Nobody made a mistake here, nobody is making any mistakes. I am not exaggerating when I say it was complete and utter perfection,” she said.

Nesrallah wanted to say thank you to Shen Yun’s artistic director. “This is just really a stroke of genius. … I  can’t believe there is a new show every year,” she said.