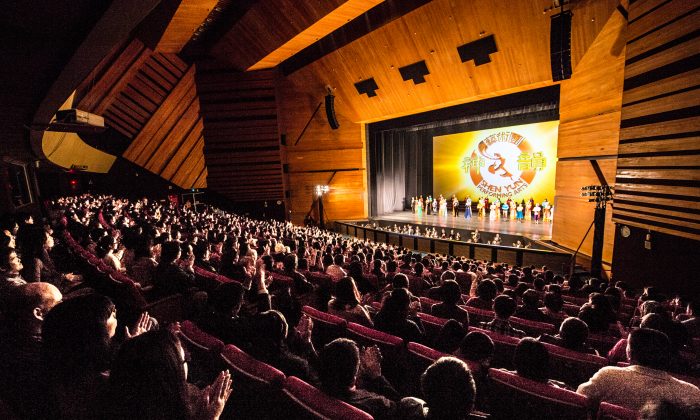 TAICHUNG, Taiwan—”Many domestic young actors envy that Shen Yun Performing Arts is able to spread the authentic Chinese culture,” said Mr. Lin, a Mainlander ( a pseudonym) after watching the Shen Yun performance.” “Shen Yun is just like a source of fire, and it creates a new dimension.”

The Shen Yun Performing Arts International Company’s 2014 second performance in Taichung City at the Zhongshan Hall on the night of March 13, not only attracted the mainstream elites from all circles in Taiwan, but also many visitors from mainland China who broke through various obstacles to come to Taiwan. Mr. Lin was one of them.

“When the curtain went up, I felt I was in the heavenly world. It is really amazing!” Mr. Lin said.

“The show really fascinates the audience, making them feel that they were personally on the scene” he said.

From ancient heavenly worlds, to the Han, Tang, and Qing dynasties, then to the contemporary stories, Shen Yun leads the audience to experience China’s 5,000 years of history, travel across the Divine Land, and enjoy the legendary stories from Chinese history with just two hours.

Mr. Lin was fascinated, and he said with great emotion, “So far as I know, many young dance actors in China envy such performance, because it (Shen Yun) chooses to spread the traditional Chinese culture.”

Mr. Lin said that all theatrical performances in mainland China are merely superficial arts created to reinforce the ideology of the Communist Party, “Many students from professional dance institutions started to learn dancing since their childhood, and they had a fine dancing skill, but all of them are performing the praises of the Party. Everyone is tired of these performances because their contents are untrue.”

Through the classical Chinese dance, Shen Yun illustrates many classical legends, and reflects the compassionate traditional values and moral concepts of Chinese at the same time. This had earned Mr. Lin’s high praise, he said, “(Shen Yun) uniquely uses the form of dance to make the world understand the true Chinese culture. It is in a path of reviving the Chinese culture.” He then added, “As a Chinese, I am proud, I must thank them!”

Mr. Lin expressed his great regret as Shen Yun cannot perform in mainland China. He said only Shen Yun can bring the hope, “The Chinese dance had walked into a dead end, but Shen Yun is just like a source fire, and it creates a new dimension.” He looked forward to Shen Yun’s returning to China, “Because Shen Yun is the pride of all Chinese people!”