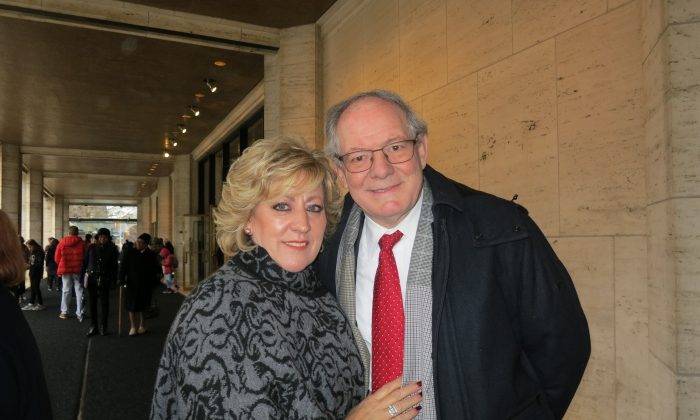 NEW YORK—When Fernando Rosa experienced Shen Yun Performing Arts he was captivated by the energy of the performers. He said although they appear young in age, their passion to preserve their culture, and their dedication and artistry impressed him.

“I thought they really did a phenomenal job,” said Rosa, who is a president and CEO of a financial services company.

“It comes from their putting on a lot of work to make it really work it together. It comes from really experiencing the old culture in their country’s life. I mean when you’re connecting back to time and all these that you have, that is energy to show the world what you can do and how you can do it. So obviously all of those performers take a lot of time … to make sure that they bring the best they can.”

Rosa and his wife saw the New York-based traditional dance and music company perform at The David H. Koch Theater at Lincoln Center on March 10. Shen Yun’s mission is to revive China’s 5,000 years of semi-divine culture and values through performing arts.

The performances consist of about 20 vignettes that feature classical Chinese dance, ethnic and folk dances, story-based dances, as well as solo vocalists and musicians. All this is accompanied by a live orchestra that blends Chinese and Western musical instruments creating a harmonious yet distinct sound.

Rosa, who is also a radio producer, said he could tell from their determination that the performers “have really great thoughts about what life is supposed to be all about.”

Many of Shen Yun’s performers practice the spiritual discipline Falun Dafa, also known as Falun Gong, and follow its tenets of “Truthfulness, Compassion, and Tolerance.”

According to the Shen Yun website, practicing Falun Dafa is a state of mind that guides daily life, is oriented toward self-betterment, taking responsibility, and putting others first. By incorporating these principles into their work and the production, the performers attempt to inspire audience members to reflect about themselves and the world around them, just like Rosa.

“I think that the people ought to take a look at the entire development of themselves and the entire spirituality, to make it really better,” he said.

Connection Between Past and Present

Rosa thinks Shen Yun’s mission to revive traditional culture is important as it helps connect the past to the present.

Ancient Chinese civilization is replete with virtues and values that stem from China’s divinely inspired culture. Concepts such as “respect the heavens to know one’s destiny,” and “man and nature must be in balance” gathered deep meaning over thousands of years of history, as did the five cardinal virtues of benevolence, righteousness, propriety, wisdom, and faithfulness.

China itself was once known as Shen Zhou, or the land of the divine. This term describes a land where deities and mortals co-existed and a belief that the divine transmitted a rich culture to the people of the earth, according to Shen Yun.

Rosa thinks to have a connection between the past and the present helps our next generation to recollect some of the traditional culture and values and teach them the other important things in life other than elements of modern society like technology.

“What we really need to do is try to tell them is, you know, the cellphone is important, but there are other things that are as important [like] the spiritual, the culture, the connections [between the old and the new]—all of those things are important,” he said.

With reporting by NTD Television and Sally Sun.