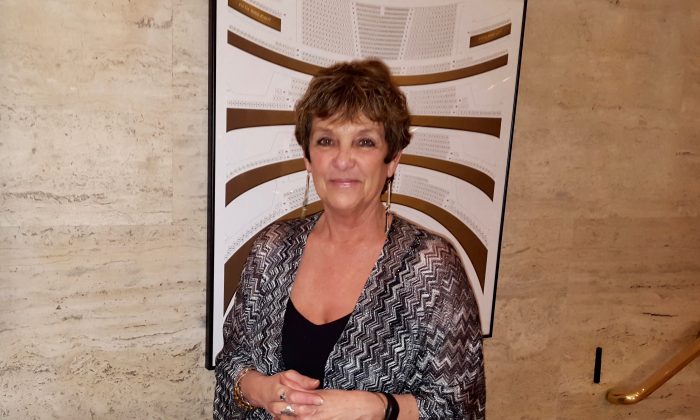 NEW YORK—Watching Shen Yun Performing Arts, Dorina Tiso felt as if she was returning home, to a period of time when the world was kind.

There was a spirituality that permeated the traditional Chinese culture Shen Yun presented that brought about a sort of calm, a sense of peacefulness, and a sense of family, Ms. Tiso said at Lincoln Center on March 13.

Every two years, Ms. Tiso spends about a month abroad, traveling to all the areas of the world she’s interested in. She’s covered much of western Europe, and plans to move East, including to Asia for upcoming trips. For her birthday this year, her grandson treated her to Shen Yun: a trip to China’s ancient past.

Ms. Tiso, an avid traveler, has seen cultures and places change over the years, and seeing Shen Yun was nostalgic for her.

It made her think of her grandparents’ home in Rome, a time where people looked out for each other, when religion and politics weren’t reasons for hatred, and when the importance of family was prevalent.

Religion and politics were brought up with such subtlety in a way that made you thoughtful about it and accepting, she said. And through the 20 performances of dance and song, she got a glimpse into the different dynasties and stories of the ancient civilization.

Traditional Chinese culture was passed down for 5,000 years before communism took power and sought to destroy the traditions and beliefs. It was said to be a divinely inspired culture, and its people valued virtues like benevolence, wisdom, justice, loyalty, and propriety.

“It’s great. We shouldn’t let the old culture go away; we should keep it alive,” she said. There were values—like family—but even the details far in the background in the performance spoke of old traditions that were worthwhile.

Ms. Tiso had bought three large prints of Shen Yun to take home, and she pointed to the heavenly palace in the background of one scene. Such structures are said to have inspired Tang Dynasty-style architecture. And these buildings that stood for thousands of years were built without nails and hammers, she explained.

“We’re getting away from things like that and we need to bring it back,” she said.

And the way Shen Yun brought it together was jaw-dropping—Ms. Tiso said she felt like she had her mouth open in awe throughout the performance.

“The athleticism of the dancers was just breathtaking. They’re so light, so light on their feet, just like they’re floating, and they make it look so easy,” Ms. Tiso said. “It’s breathtaking.”