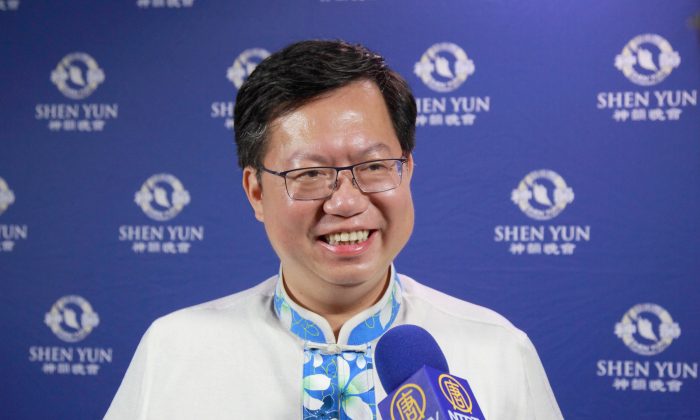 TAOYUAN, Taiwan—The poor weather, because of a typhoon, did not dampen the turnout and enthusiasm for the debut of Shen Yun Symphony Orchestra at Zhongli Arts Hall on Sept. 17. Among those who turned out for the performance was Cheng Wen-tsan, the mayor of the city.

“It’s a great musical feast,” said a delighted Mayor Cheng, who was a regular for Shen Yun Performing Arts. He elaborated that he was able to make it to the event because his business trip abroad was cut short because of the typhoon.

The symphony orchestra is a part of Shen Yun Performing Arts, the New York-based dance company that was established in 2006. Four years ago the orchestra began to independently tour cities in both the United States and Canada.

The mayor said with a smile, “so I managed to come to the concert.” He expressed his wish that the audience turnout at the 11 other cities, where the orchestra would put on 15 more performances, would be as strong as that in Taoyuan, where a full-house audience attended.

While this was the first year that the symphony orchestra came to Taiwan, Shen Yun Performing Arts had been enjoying great success on the island since 2007.

Mayor Cheng was most impressed by the orchestra’s combination of both Western and Chinese instruments. “There are the pipa, violins, and also the erhu … they were combined very well.”

The Chinese violin, erhu, is a two-stringed instrument, while the pipa, a plucked instrument, is also known as the Chinese lute and has been considered the king of all Chinese folk instruments for thousands of years.

With the Western orchestra serving as a foundation, Shen Yun Symphony Orchestra makes it able to accentuate the beauty of ancient Chinese instruments. According to the company’s website, it “draws on cherished ancient melodies and delightful musical styles to create a brand new, yet wonderfully familiar, experience.”

In addition to liking the all-original Chinese melodies, Mayor Cheng expressed his love for the Western classical masterpieces. He mentioned The Hungarian Dance No. 5 by Johannes Brahm as one that stood out for him. “Every piece is very good, ” he said.

Singing by soloists, another essence of the orchestra performance, also impressed Mayor Cheng deeply. He pointed out that tenor Tian Ge was exceptional. Tian, a Gold Prize winner of the All-China Music Competition, sang the song “Life Is Fleeting” before intermission.

The soloists of the symphony orchestra are reviving a lost singing technique—singing with bel canto technique in the upper register—which has been lost in modern China and Europe, according to Shen Yun’s website. The technique is believed to be able to produce the most beautiful and purest tone of the voice.

In addition to great singing and music, Mayor Cheng believed he had much to take home with him after the performance. The 5,000 years of traditional culture, which the performance had brought to life, was equally excellent for him.